This Week, I've been:
Mainly stalking two websites: Least Helpful, which showcases the absolute worst, but also hilarious reviews from Amazon and various other places; and The Vagenda, which in Frances's immortal words, 'I assume it stands for the vagina agenda.' Either way, The Vagenda is not only hilarious, but is also smart and just the right amount of angry- it basically takes British women's magazines and deconstructs them to show their gross, anti-feminist, fowarding the patriarchy ways. You know, in a hilarious way! Frances recommended this to me after I tweeted about how much I fucking hate Cosmo, after buying it in a moment of weakness because Christina Hendricks was on the cover and, well, I love her. This post on The Vagenda sums up everything that I had a problem with in the magazine, in a funny little nutshell. But seriously, I really do fucking hate Cosmo...

Anyway, ranting aside, I really didn't do that much of great interest this week. I did cook like two new dishes from scratch which I'm pretty proud of, as well as baking (and burning, slightly) some red velvet cheesecake brownies, which sound amazing, and yet in practice are relatively... meh. Mind you, I should have known that I wouldn't be that enthralled with them because I don't really like baked cheesecake, but they always look so good that I forget such things! Foolish child... I made them on Monday anyway, and I guess they put me off any more baking exploits for the week!

I also didn't have masses of time to bake because my mum decided to go and be (extra) ill this week. While this didn't really mean there was anything extra for me to do practically, psychologically it was a bit upsetting to see her kind of listless and being all temperaturely. A later than I would have liked doctor's visit basically diagnosed her with an infection (I say from the operation, she vehemently denies it) and some antibiotics have gotten her temperature down and her pretty much back to normal. We also had a hospital visit on Monday, which was a bit of a mixed bag- on the one hand we found out that 14 of 21 lymph nodes were 'involved' (i.e. had a bit of cancer in them) and so she has to have chemotherapy, which wasn't a confirmed thing before, but they got a healthy margin on the tumour they did take out, and so she doesn't have to have a mastectomy. So, not exactly jumping around news, but not the worst case scenario either. Her first appointment with the oncologist is on Friday morning, so I guess that's when we'll find out a time frame for things happening and stuff.

This would have normally meant 'yay! Hardly any hospitals this week!', only that procedure that my dad was meant to have last week didn't happen because there were no beds, so he's having that this week instead. For some reason he thinks that means he's going to be in hospital all week, but he could be home the next day, we're just not sure yet. Either way, it's still a step on the way to getting him better than he has been in years. I would complain more about the fact that there were no beds this week, but I really don't want you to get the wrong impression about the NHS- it's the greatest thing about this stupid country, and without it my parents would probably both be dead, and if not that then definitely bankrupt. So yeah, healthcare provided by the government: it's all good. If David fucking Cameron would just leave it alone, then that would be great, kaythanks!

It probably hasn't escaped your attention that it's March, and I don't know about things where you are, but here the weather's actually taken a turn for the worse! It's really disgusting and freezing and raining today, and it's just been basically like 'meh' for four days, which essentially describes the mood I'm in most days... Anyway, it's really pissed me off today because there are these trees down my nan's road that are gorgeous in the spring and covered in blossom: 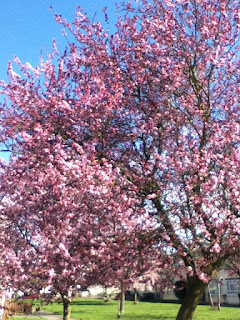 photo from last year. Obvs.
and according to my mum, yesterday they were in beautiful bloom, but because of all the gross wind and rain, today they're basically bare again! Which obviously makes me go *wail* *snivel* *sob* etc, because damn I love the blossom. Hmph.

And that's about it folks! I was supposed to go to a gig with my friend this week, but I cancelled because I was really worried about my mum and wanted to stay and look after her- this isn't something I regret, because she was really ill on Thursday and I don't really trust anyone else to look after her, but at the same time, I think I do need to get out of the house so I don't drive myself crazy. Again. So, we'll see how well I do at that. No big reading plans for this week- I'm reading two books that I'm not crazy about, so I'm just trying to get through them as quickly as possible so I can move onto better things. Jillian's reading plans for March have inspired me to re-read Little Women (because they're the Marches! Get it?!) so I'll probably start that this week. Yay! And read it in between hospital visits. Boo! It's set to be a mixed week all round, I guess...
Posted by Laura at 17:57