Devouring Books: A Short History of Nearly Everything by Bill Bryson 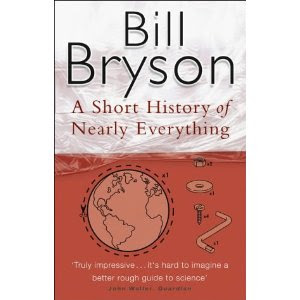 I like Bill Bryson. I like Bill Bryson so much, that if he wrote a book about cultural variations of vomit, I'd probably read it AND, more disturbingly, enjoy it. I don't know how he writes so well, but oh boy does he write well- or at least in a style that appeals very strongly to me. Whatever he's writing about, he takes the subject seriously but not too seriously, and always manages to find and mildly mock the absurd. But, and I think I've said this before, his slight mocking is never cruel, because it's but far displaced by the amount of reverence, respect and even love that he has for whatever subject he's chosen to write about this time. Basically, he's just amazing, and if you haven't read anything he's written, then you probably want to get onto that, pronto.

Anyway. A Short History of Nearly Everything. I put this on my TBR Pile Challenge list because I figured, hey, it's Bill Bryson, I'll definitely be able to read it! And then about a page in, I realised it was going to be all about science and, well, I freaked out a little bit. Because science... well, I was fairly good at science at school (we had these prize giving assembly things and I won the science prize like 2 years in a row, to which I say NERD) but I was only sort of functionally good- I was never passionate about science like I was about books, and hence I probably put more effort into learning the stuff because it could be learnt, as opposed to English where I more or less just read and had opinions and things- and liked it a lot better. But, when I was 16, I had never read Bill Bryson explaining science before.

Because, oh my goodness. Does he explain things well! I think a lot of it has to do with not being a scientist himself, so that he is basically on the same level as his readers when it comes to science (or at least, I'm thinking, he was when he started writing his book) and so he goes into subjects with just the right amount of depth- deep enough so they remain interesting and you really feel like you're learning things, but not so deep that you feel lost in a sea of scientific terms and lingo. Honestly I'm impressed with the style over anything about this book (and I was impressed with A LOT of things about this book) and I really feel like anyone could read it and gain a deep enough overview of the history of the universe, and probably even a lifelong love and appreciation of science. I really feel like I can- in the days since I finished it, I've been a lot more interested in the science stories in the paper, and I've been like 'oh, that must be to do with the structure of the earth' or something like that. It's really weird, but it also makes me feel really good!

So let's talk about the content shall we? A Short History of Nearly Everything, is, literally, a short history of nearly everything, or, more specifically, a short history of science as a discipline, combined with the things that this scientific explanation has more or less probably found out for kind of sure. Because, as the book goes on, you come to see that there has been so much dispute over various things (the age of the earth, how long humans have been around, how the earth formed, how the universe began etc etc) that the information we have now is really just the best guess anyone can have about any of these things. Bryson also manages to succinctly and sometimes hilariously profile prominent and important scientists, in revealing what they have discovered, and while I enjoyed the human side of things, I definitely enjoyed the wonders of the universe more- thinking about how massive the universe really is, and on a smaller scale, how wonderous humans are, and how amazing it is that we're here at all.

Because it really is. And here's the thing- when I was younger, I used to overthink things a lot (actually I still do, but mostly I just tell myself to shut up, and that helps) but I used to lay awake at night thinking about how massive the universe is, and how tiny earth is in comparison, and if a massive asteroid hit the earth then everything would just be wiped out in an instant and no one would have really mattered because everything would just be gone and so no one can do anything that's really important, and if it was important it's only important on earth and that's just the tiniest thing in the universe and so on, ad infinitum. (Does it kind of go without saying that I was basically an atheist child? Because I think believing heaven was an actual thing would have been very comforting at these times!) And I never really found a solution to this problem and just generally kept on living because, you know, what else can you do, but this book kind of made me rethink things. Because, the fact that we're here at all is sort of a miracle, and being important or not isn't the point- we just have to take all of our trillions upon trillions of atoms and do with them what we will for as long as we've got them, and, you know, enjoy it!

A note on religion- A Short History of Nearly Everything massively seems like the kind of book that would be banned in some of those insane deep south high schools you hear about because it basically doesn't even mention any kind of creationism or anything like that as a theory- everything about it is purely scientific. I can't find any evidence that it ever has been banned though, to which I say 1) good! and 2) this is surely evidence that Bryson is universally loved?! I don't know though, maybe the fact that Bryson never says 'the atoms that make up everything were definitely not created by God' is enough to make sure that no one can really object to it. Either way, yay science!

So clearly A Short History of Nearly Everything is kind of a miracle in itself. I mean, it just made me say 'yay, science!' which is fairly unlike me! What I'm gearing up to here is that basically everyone ever should read this- I thought I had no further interest in science, but it turns out that I do, and I don't think it can hurt anyone to know where we came from (probably) or to think seriously about where we may be heading. There's even a tiny bit of the book where Bryson criticises the fact that 70% of antibiotics produced are used on factory farmed animals, which, considering my recent interest in such things, made me whoop a little bit! And if the sciency things aren't enough to make you read it, then how about the funnies? Observe:


"You may not feel outstandingly robust, but if you are an average sized adult, you will contain within your modest frame no less than 7x10[to the power of]18 joules of potential energy- enough to explode with the force of thirty very large hydrogen bombs, assuming you knew how to liberate it and really wished to make a point."

"The Romans also flavoured their wine with lead, which may be part of the reason they are not the force they used to be"

I literally only wrote down these two hilarities (there are lots more, but that first one really really made me laugh) because I was too engrossed in the wonders of the universe to stop reading- I barely even came up for air for the whole few days I was reading it. So yes. It's fairly amazing. Now go and read and learn and laugh and make that your life's mission forever.
Posted by Laura at 09:19