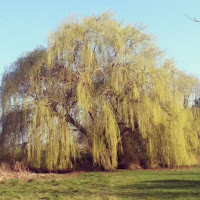 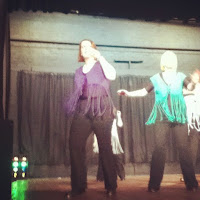 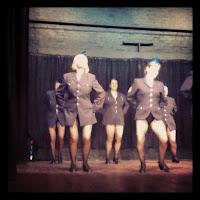 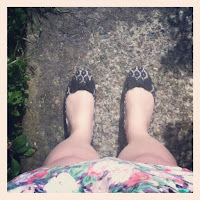 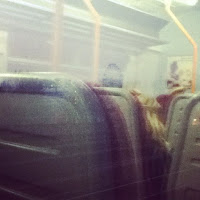 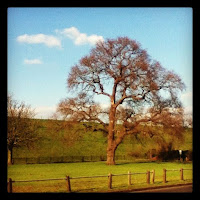 This week, I: Read outside in front of this weeping willow... Watched my sister in these two dances (amongst others)... Had bare legs outside- in MARCH!... Saw the London Eye and took a really blurry, mostly reflected train photo of it... Made big plans for many dates with this tree when it gets a bit warmer- perfect reading location!
It really wouldn't be an exaggeration to say that this week was a million times better than last week. Like, really. The sun was shining, there were trips and dancing shows and lunches out PLUS, and this is the best bit, only one hospital visit! Yes! Next week is not looking like that, BUT we're talking about this week. And it was lovely.
So, let's see. I read outside twice for like full afternoons, and although it was perhaps a teeny bit chilly to do it, I couldn't resist anyway! I'm hoping for more of the same this week, although I'm having a bit of a reading crisis at the moment- I'm in love with 1Q84, but it's massive, and I have to walk a little way to get to a suitable reading spot and really don't want to carry it... But really, I can barely put it down! The tree that I want to read under that I've taken a picture of above (isn't it lovely! It's on this bit of grass next to Shepperton Studios, and if Johnny Depp happens to be there this summer, he's totally invited to come and read next to me) is nearer than where I normally read, so maybe I'll just suck it up and carry the heavy book with me. Of course, it'll probably rain all week now that I've said that, so I probably won't even have to think about it!
I had a really nice family lunch out on Thursday, and it felt like the olden days, in the school holidays when we used to go to garden centres and I used to complain- I'm concerned about the fact that I like them now, but we did go to a really nice one and I got some fudge that I'm still working my way through! I also had a little picnic on Friday with my auntie while we were waiting for my mum to have this scan- and obviously both lunches out involved cheese because everywhere lacks any imagination for vegetarian lunches, to which I say grrrr. Grrr indeed.
Friday night was a bit of a rarity for me- I left the house! And went to London! My friend knows this guy who's in a band (which probably sounds cooler than it actually is- she does know him from church) and they were playing in this little pub near Kings Cross, so that's where we went, and that was really fun! It was good to see my friend too- I haven't seen her for a while, and had to cancel on her when my mum was ill and I didn't want to leave her; and we had a really fun night! And it's always nice to be in London, which is why I'm going there tomorrow too to meet the lovely Frances! Which is extremely exciting because I haven't seen her since... October? And not at all this year, which is insane! So, yes, I'm very excited about this!

Saturday was also a bit of an event because I actually went out again! Oh man, the amount of leaving the house I did this week was insane! Anyway, I went to watch my sister dance in this dancing show, in which she was great, and the rest was... well, mixed. It's really weird because she goes to the same dancing classes that we and our cousins went to when we were younger, so it's weird to watch the dances and know exactly what each of the dancers are feeling, and also to know that I could do all the steps they were doing, only better (well, better than like the little ones who didn't know what they were doing, anyway!) I really do have to say that if you've never watched like 2-4/5 year olds dance before, you're really missing a treat- they really have no idea what they're doing, bless them, but they're so teeny and cute and had the entire audience in stitches because they were so hilarious! It's a very endearing thing to watch, I have to say.

And that was pretty much my week! I didn't do much cooking because I feel like I should let my mum do some stuff before she starts her chemo (which is also next week, on Friday) so that, when she doesn't feel so hot, she feels like she can let me do stuff because I've had a little break. I mean, that's probably not what she's even been thinking, but she's been getting to the kitchen before me in the evenings and then makes me go away when I try to help because 'there isn't enough room for two people in the kitchen' (actually, that's true) so, what can I do?! I think that this week I am going to make her these peanut butter cookies I was going to make her for mother's day but then ran out of time for, because apparently chemo can make some foods taste gross and stuff so I want her to have them while she can still enjoy them. Because I'm nice like that.

Reading wise, I'll be powering through 1Q84 and will have Bill Bryson's Notes on a Small Island as my portable book for train journeys and the like. In other book news, did you know that sign ups for Dewey's Readathon are up?! Very exciting stuff, and there's less than a month to go! I'm not sure if I'm going to read for the whole 24 hours this time, but I might start earlier than I did before (waiting around til 1pm was a pain in the bum) and just read until I fall asleep. I'll see. Either way, I'm very very excited, and I want to make a stack of books RIGHT NOW but I'm restraining myself. *pats self on head and gives self a sticker*. So yes. Good. I hope y'all had fine fine weeks too, and you have another great one this week. Just think, we're inching closer and closer to my birthday, which I know has some kind of international holiday status now. I think...
Posted by Laura at 11:18