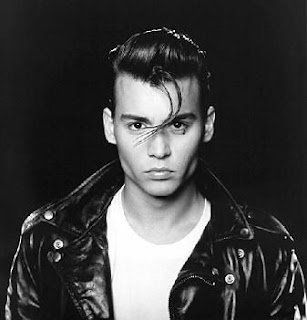 Gratuitous picture of Johnny as Cry Baby. Because I can.
I bought this book anticipating that it would be as good a read as Johnny Depp: A Kind of Illusion, by Denis Meikle, which I have read many times, and even cited in an essay once. This is not what I got. Now, I don't want to be overly critical of someone who has published numerous biographies of actors, musicians, things like that, but I honestly closed the book and thought 'I could write a better biography of Johnny Depp than that.' This is not an overstatement of my talents, or my deppmania, but rather an accurate depiction of just how bad this biography was.

So what, exactly, was wrong with it? To start with it was pretty clear to me that Goodall had either never met Depp, or never had any meaningful conversation with him anyway, since anything that is quotable to Johnny is from other sources, and not always relevant anyway. This is not necessarily an obstacle when writing a biography about someone (although I'm sure it is immeasurably helpful to have the subject's co-operation, and I kind of frown on people just co-opting others' lives for their own benefit, but anyway), but the problem is that Goodall tends to write as though he has an intimate knowledge of Johnny's motivations, even those that may not be known to himself (more on this later). Meikle, conversely, sticks more to a critical analysis of Depp's films, rather than a more personal focus on the man himself, which can only be a good move if you don't have the access to your subject that you would prefer, and makes for a more honest account of what the author can possibly know.

The thing that annoyed me most about What's Eating Johnny Depp?, however, was how Goodall found a way to relate a wide variety of Depp's actions and thoughts back to his ex-girlfriend Winona Ryder. Quite apart from this, there is quite a hefty portion of the time they were together alotted to describe Ryder's actions rather than Depp's. This seems rather odd, until you look to the front of the book and see that he is also the author of Winona Ryder: The Biography (he has also written about British non-entities Fearne Cotton and Davina McCall... ahem, no comment!), so it's almost as if he just couldn't be bothered to find out what Johnny was doing at this time, and just took information out of previous 'research' to fill up some pages. Nice. The really annoying bits come after their break up though, when every turned down movie becomes attributable to Winona, and things she has said are supposed to have had an impact on Johnny's actions. I'm not positive about this, but she may have even been given a comment on Kate Moss and Johnny's break up. This all just seemed ridiculous, and above all lazy to me. There is a lot more to Johnny Depp than Winona Ryder, and constantly referring back to her was just really unnecessary. And (clearly!) irritating!

(Just so you know: I don't hate Winona Ryder! Far from it, in fact, but I just didn't need so much of her in my Johnny Depp biography, you know?)

All of this just put me off so much that I couldn't really take the rest of the book seriously. There aren't that many redeeming features to it, to be honest, except for the photo pages that you get in such books, which were... extremely pleasant to look at (Johnny Depp's face=heaven), but I don't attribute these much to Goodall, but rather to his (seemingly illiterate!) publishers. So thanks to them for that, but for the rest of the book, not so much. One other thing I would point out is the lack of any detail of things post Pirates of the Caribbean, which is about the only thing that is wrong with the book that Goodall can't take responsibility for. It does seem unfortunate that the book ends just before Johnny Depp becomes the most wanted actor in Hollywood, and enjoys a massive shift in the public perception of him (including, I might add, raising my own awareness of him, where it has remained ever since!). This is just bad timing that can't be helped, but basically everything else in the book could have been.

Goodall has just published another Johnny Depp Biography, The Secret World of Johnny Depp. Much as I would like to see how much of these more recent shifts in his career are attributable to Winona Ryder, I think I'm going to stay about as far away from it as I possibly can. And if anyone wants a new biography of Johnny Depp written, I'd be only too happy to oblige. I really couldn't do much worse.
Posted by Laura at 17:01