Warning: This post contains spoilers! So if you want to watch Rachel Getting Married (and you really should!) then stop right here! 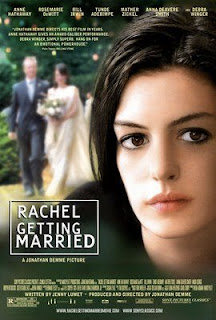 So, the Oscar nominees for 2011 have been announced; and the only logical thing for me to do is review a film that was nominated (for best actress) in 2009. Yeah. The reason for this is mainly that I am so poor that I can't even afford to go to the cinema anymore, and so can't really comment on any of the nominated actors/films (except to say that I would love Christian Bale to finally win an Oscar, and I love Annette Bening an obscene amount and WHO WOULD NOT GIVE HER AN OSCAR FOR AMERICAN BEAUTY?!) Ahem. Yes. So, I am poor, and Rachel Getting Married is just so good and gives you so much to think about that you can just watch it every Oscar season and see something new in it, and interpret it in different ways. Or that's what I'm going to tell myself anyway...

There are a lot of different things to look at when you watch Rachel Getting Married, and it's almost impossible to tell how you feel about each of them, since it changes each time you watch it. After numerous viewings, I am only sure of a few things:

Apart from these things, I am always oscillating between the way I feel about the characters, the situations and everything else about the film. This is not a complaint, but rather a compliment to an extremely intense and well-executed film, where I'm not sure even the writer would necessarily know how she feels about her characters if pressed on the matter.

Kym is the character I struggle most with, since I feel almost proud of her sobriety and the way she is trying to progress, but at the same time there are moments (at the rehearsal dinner especially) where she seems intensely selfish and not someone you would want to be around you. There is also her drug addled past, where she caused the aforementioned death of her brother, but I consider the deep punishment that she has inflicted on herself to be enough for anyone to bear. This in fact leads to one of the most interesting issues that the film addresses: once you have done something so terrible, where can you possibly go from there? As Kym puts it, "I could be Mother Theresa and it wouldn't make a difference." This question really resonated with me- if you do something awful, there is nothing you can ever do to change it so how are you meant to act afterwards? Do you continue down the road of addiction, as Kym did, or do you turn to good deeds, even with the knowledge that nothing you can possibly do will make up for or change your past actions? I don't think there is necessarily a right answer to this question, other than you finding a way to live with yourself, by any means possible. Precisely because Kym is still alive, and trying so hard to get better, you can't help but feel a certain sense of admiration for her and hope for her continued recovery.

Kym and Rachel's relationship is a crucial part of the film, that everything else seems to be set around. There are so many elements to it that it is almost impossible to discuss in it's entirety, but I'll have a go at it here! In many ways it is typical of that of many other sisters- they can't stand each other one minute and then adore each other the next, in one instance Rachel is shouting at Kym not to get ash on her wedding dress, the next they are telling a childhood story and finishing each others sentences. This relationship is ultimately complicated by the things that have already happened, however: Rachel is resentful of the attention Kym has constantly received from their father, and recalls the loneliness she felt after their brother's death and Kym's many (we assume) stays in rehab; whereas Kym feels judged and possibly hated by Rachel, as well as believing that Rachel is beyond reproach while she is always the one in trouble. While their problems are not fully resolved through the course of the film, there are two key shifts in their relationship: one, where Kym comes back having slept in the car she crashed all night and Rachel accepts her unquestioningly, helping her bathe on the morning of her own wedding, and here we truly see what it means to be family, and to have their support no matter what. The other comes at the end, when Kym leaves and they don't need to say much, they just know that the other will be there if they need them, or just that they will always love each other, even if they don't like each other all that much. It's a relationship that feels familiar, even to those of us without drug addict sisters, and it really rings true.

Family is such a major part of this film that everything else seems to pale into insignificance in comparison. There is a wedding, for a start, which tends to denote a family coming together, and this is really the case for most of the characters in the film. There is the absent brother, the husband's family, the drug addict sister, the friends who feel like family. There is even the generation of a new family as Rachel and Sidney announce their impending addition. Being surrounded by this much family can be a wonderful thing, but at the same time it can also feel almost suffocating, and I get the sense that this is what afflicts Kym the most during the film. In her eyes, her father's constant surveillance feels like judgement, and his almost waiting for her to do something wrong, whereas her mother's barely hidden hatred of her is even more disheartening. As a result, it is hardly surprising that, at the end of the film she chooses to leave, not to go back to her life before, but (presumably) to stay with a nurse from her rehab facility. In this action, the viewer almost regrets that she doesn't end up with Kieran (perhaps the character with the capacity to understand her best), but the film is just far too realistic to let that happen- people don't just fall in love over a long weekend. This end, however, also shows us something else, perhaps more integral to the film itself. The camera stays directly on Rachel long after Kym has left, reminding us that, although it may not always have seemed like it, Rachel is the real star of this story, it was after all her wedding, and despite all of the things she has gone through, she has survived it all a lot better than everyone else. Rachel is, in a sense, our heroine, our guiding beacon of intelligence and being sensible, and it is to her we must look for the lynchpin that holds this family together.

In case I didn't get this across, I really really love this film- it makes me think a lot about a lot of stuff, and that can only be a good thing (the part of my degree that wasn't English was Philosophy, so I like thinking about stuff. A lot.) There is so much more that could be said about it that it's crazy, but I'm going to stop now so as not to bore you. But I hope that if you've seen the film, you enjoyed it as much as I continue to do!
Posted by Laura at 20:41