The Insanity of Pulp Fiction

"This has been the single weirdest fuckin' day of my life" Butch Coolidge.

I ended up watching most of Pulp Fiction last night, and just started thinking about how insane Quentin Tarantino must actually be (in the best possible way, of course). It just seems so incomprehensible that something that starts innocently enough, with an adorable french woman forgetting Butch's watch, could end in the mental way it does, so fast that it doesn't just make your head spin but blows it right off!

It's all quite plausible to begin with (well, within the context of the film, anyway), Butch obviously has to kill John Travolta, who would have been sent to stake out his house to teach him a lesson. So far, so good. Things start to get a bit strange when Butch and Marsellus cross paths for no apparent reason (shouldn't everyone know where Marsellus Wallace gets his breakfast from, so they can successfully avoid them and not end up dead when they've stolen from him?) but their little exchange of violence here is also pretty par for the course. It's not until they stumble into a pawnshop that everything just goes completely cuckoo.

Who can honestly say that their first thought at this point of the film was that Butch and Marsellus were about to be chained to some chairs with ball gags in their mouths waiting to be anally raped? I don't think that anybody, in the history of watching this film has ever seen it coming, and nor would I want to meet the person who has! It's just so unbelievably random- you expect them to just keep on fighting, maybe move on to another place and do more of the same, but not for them to be taken round the back, accompanied by the shop owner and a police officer (!) ready for some anal rape. Seriously, what. The. Hell?!

A note on the gimp: I think the bring out the gimp music is possibly the most gimp-appropriate music ever, so there's that in his favour. I would, however, question Zed and Maynard's decision to use him as a guard for a prize fighter while they are off raping Marsellus. Let's think about this logically- he is chained to the ceiling so can't exactly move very far in any direction, plus he is wearing a mask that will muffle any warning cries he can make. Do we think that one punch from Butch (who has just punched a man to death) will render him unconscious for quite a long time? Not the sharpest tools in the toolbox, these guys...

After this, what happens does seem pretty situation appropriate, if you can ignore just how ridiculous the situation is. Butch has the moral dilemma of whether he should just leave Marsellus to his horrible fate, and live the rest of his life in fear; or go back and save him, possibly doubly risking his own life in the process, with the danger from the rapists, and that Marsellus's gratitude might not outweigh his continued anger at him. Because Butch is essentially good, he chooses the latter option, and wins his Marsellus endorsed freedom, allowing him to ride off into the sunset with his ladyfriend. The rapists end up dead and/or penisless, and Marsellus gets to retain his status since nobody ever needs to know about his humiliation and horror (although he hopefully gets some kind of therapy for it, because that was some pretty bad stuff).

Here's the thing though: should Marsellus have even let Butch go? It was, in essence, all Butch's fault that they were in that shop, when he could have run into the dry cleaners next door or something. Or, should Marsellus have even killed Fabienne for forgetting the watch in the first place, without which none of this would have had to happen and Marsellus could have just gone home with his doughnuts and coffee, and never have had to worry about being anally raped.

Personally, I just worry about who's going to unchain the gimp when he finally regains consciousness and finds his two masters dead... Maybe Marsellus will take him home as a pet for Mia to play with? Just a thought.... 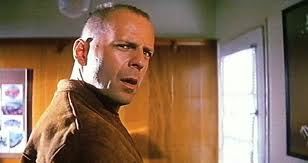