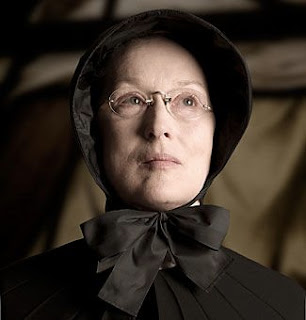 I have seen Doubt twice in the last month. While it is a great film, I wasn't so enamoured by it that I absolutely had to watch it twice, but I had it delivered by Lovefilm, and my first copy missed out two sections, about 3 minutes long each. You might not necessarily think that these two parts would make a difference, and I definitely felt that I had a pretty good understanding of what had gone down, and who was being punished and why, and to some extent that is true. However, when Lovefilm offered to send me an undamaged copy, I took them up on it, and I was really surprised to find that the two sections I missed actually made me think about the film in a very different way.

Doubt is essentially the story of a nun, Sister Aloysius (Meryl Streep) who suspects a priest (Phillip Seymour Hoffman) of molesting children, but there is always a doubt over whether or not this is the case, although not from the sister herself. In addition to this, there is also another nun (Amy Adams) who provides evidence for Sister Aloysius' suspicion, and allows her to feel the "certainty" that she says she has of the Father's guilt.

The two parts that I missed, then, gave me an entirely new viewpoint on Amy Adam's character, Sister James, and also a new perspective on the boy the Father is accused of molesting, Donald Miller. After confronting the Father in Sister Aloysius' office, the two nuns have a conversation that is really illuminating for the character of Sister James. For the rest of the film, Sister James seems extremely intimidated by Sister Aloysius, but here, and what I'm quite sad to have missed, she actually stands up to her and tries to make her see that she may just be prejudiced against the Father because she doesn't like him. She fails to convince her of this, but this is still Adams at her best in the film- irritated by the prejudice of Sister Aloysius, and actually standing up for something she thinks she is likely to be wrong about.

The second part I missed was part of a conversation between Sister Aloysius and Donald Miller's mother, Mrs Miller (a wonderful Viola Davis, who I am actually thrilled to see was nominated for an Oscar for her relatively tiny part). In this, Mrs Miller seems to alternately not care that her son could be being molested, to being a really conscientious and caring mother. The crux of what I missed is this: Mrs Miller seems to believe that any relationship between her son and the Father could essentially be consensual (not that a relationship between an adult and a child can ever be consensual), because Donald is gay. This, being his nature, as his mother puts it, is not something she thinks he should be punished for, and besides he only has 6 months before he leaves the school, and if he graduates from there, he has a better chance of a better high school, going to college, and basically an escape from the life that he has now. Her view, then, is not one that condones her child being abused, but one that wants him to get into a position in life where he will never be abused in any way, by anyone. It's hard not to sympathise with her when you know these circumstances, whereas in my first viewing, she just seemed not to care very much at all.

A full viewing, therefore, is obviously essential for all films, but it has amazed me that just two tiny parts could have such an effect on how I feel about it as a whole. There is just one other part that I would like to highlight. At the end, the Father having left the parish but also been promoted, there is a moment where Sister Aloysius starts to cry and says "I have such doubts!" In saying this, I'm not sure she is saying that she doubts that the Father really was molesting children, but more doubts about a God who would allow such things to happen. Since the film ends here, there is no discussion of whether or not she is having a spiritual crisis, but as there are allusions in the film to "moving away from God in doing his work", I feel justified in offering this as a suggestion, especially since she can't exactly have doubts about the Father now, because even if she did, he is in a better position now than he ever was. It is an incredibly thought provoking moment to include at the end of the film, and ensures that you are left thinking about the film for a long time after it ends. I know that I was.
Posted by Laura at 21:28