Revisiting Films... Something's Gotta Give, or My 'Creepy' Love for Jack Nicholson 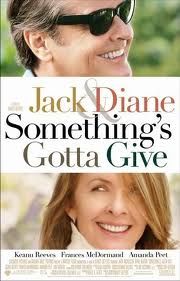 I have been told that my love for Jack Nicholson is disturbing. A little creepy, even. I can't really dispute this, but nor can I deny that there is something about the man that is absolutely irresistible to me! It's not something that I developed after watching The Shining, or One Flew Over the Cuckoo's Nest, since I'm pretty sure Something's Gotta Give is the first film that I saw him in, so I clearly fell in love with the older man first! He's just got so damn much charisma, that it's difficult not to love him- or at least, that's my opinion on him anyway!

So what is it about him in Something's Gotta Give? It's not the constant wooing of 20 year old girls, believe me (although that is such a double standard because I would totally date him and I'm only 21, but I suppose if he actually wanted me, I'd find him lecherous. Ugh. Confusing) and it isn't his arrogance or total obsession with sex either. What is sexy about him is his self-confidence, his underlying vulnerability, and the way he finally opens himself up to the possibility that he can change, and actually be genuinely happy. It doesn't hurt that his rival for his fair lady's affections it Keanu Reeves, who lets face it is cute, but, lets face it, he is acted off the screen by Nicholson! Also, he has an amazing face- sort of cheeky and knowing and just filled with personality all the time. If I'm too enthusiastic about all of this, please let me know!

Something's Gotta Give is not a film I'm supposed to like. Not because there's anything wrong with it, but more because it's (supposedly) aimed at the 40 plus female (probably divorced) audience, who want to believe that they can still find love again. I'm sure that this demographic was, on the whole, pleased with the film, but that doesn't stop it from appealing to me too! There is, of course, the stellar casting (not only Nicholson but Diane Keaton too!), and it just has such a wonderful feeling about it. These people are in such beautiful, expensive surroundings that you know they're definitely going to be ok, even if they're not too good right at that very second. This can also of course have it's downsides- it's hard to be sympathetic towards very rich people when millions of children go to bed hungry every night, you know. But, nonetheless, you can probably watch a film without having to think about that too much, and without feeling too guilty either. After all, you're not the one living the opulent life (well, I'm not- you might be!)

So. I do like this film! I like it a lot, and I don't think that because these people are well-off that I, or anyone else, can't relate to them. Similarly, just because our protagonists are older, doesn't mean they are not relatable to either. The film encourages the idea that no matter how set in their ways people are (and Harry, Nicholson's character, is very very set in his ways), that they can change and realise what is actually good for them. It is also heartening to see Erica, Diane Keaton's character, actually experience deep passionate love for the first time in her life, her ex-husband seeming to have been a good friend rather than someone she was ever crazy about (indeed, it is Harry that finally makes her realise that she does "like sex!"). It is also pleasing to me that, in a film where Harry only sleeps with women under 30, and where Erica's husband marries a 31 year old woman, that she also gets a little taste of the younger man, in the shape of Reeves' young doctor- this is not something that is normally allowed to happen to older women in films, and I think the fact that it does has something to do with the female writer and director behind it all. God bless Nancy Meyers!

The ending of this film is such an unbelievable cliche, but somehow, for me, it really really works! For a start they have to be in Paris, because of the symmetry with Erica's play; and Erica and Harry absolutely have to end up together because they truly love each other, and it would just be foolish for them not to admit that, and to just go on living a simulation of happiness. The fact that it is snowing, and they are in Paris could feel really tired and awful, but because Jack Nicholson realises how ridiculous it is, and makes fun of himself for having been rejected by the woman he loves in Paris, of all places, makes it all the more wonderful when Erica comes back to him and admits that she loves him too. It's all just too lovely- you can already see that they are going to spend the rest of their lives together, and what happy lives they will be!

I fear I may have just gushed a little bit too much here, so I'll add a few more details I enjoy without gushing too much, and then leave you to throw up as you consider finding Jack Nicholson desirable. Harry mentions in the film that he has looked Erica up online and that there are "8000 websites that mention her!" This is such an adorably twee number that it really puts a date on the film (it was released in 2003) since a google search today shows 275,000 results for Tony Kushner, a playwright I have somehow decided is comparable to Ms Barry (although, a search for Erica Barry comes up with 267,000 results anyway, which is also extremely impressive!) I also like the fact that they actually know how to IM each other, although I suppose two such ambitious and hardworking people would probably have a pretty good knowledge of how to use such computery things (I guess I'm only impressed by this because my 52 year old mother barely knows how to turn on a computer, let alone do anything useful with it!) And I've also just found a deleted scene where Jack Nicholson sings La Vie en Rose to Diane Keaton! This is basically the best thing that has ever happened, and I have to go and die happily now at how spectacular it is!
Posted by Laura at 21:30