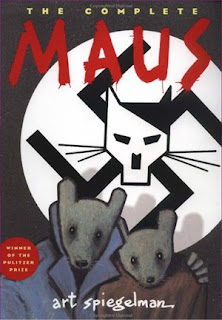 I have read this graphic novel so many times, but have never had a blog with which to talk about it before. So, I have read it anew just so I can report back on it to the internet. How very kind of me! I remember describing Maus to a friend of mine as 'a comic book about the Holocaust', which she in turn found, if not offensive, then a little bit dodgy. This is so far from being the case that I had to instruct her to read it immediately, and then even start to suggest that it might be disrespectful. Because it isn't.

Maus is a comic book about the Holocaust, it's author is the son of a survivor, and it is incredibly moving and honest. One of the things I like best about it is the way that Spiegelman refuses to present his father as a perfect person because he has suffered, instead choosing to be realistic about the man that he has had experience of, who is, let's face it, an extremely flawed man. The effect of this, however, does not necessarily make us less sympathetic towards Vladek, his father, since it becomes apparent that each the foibles that Art finds annoying is a direct result of his Holocaust experience- the need to save food, the need to stay fit, his desire for Art to have a wider variety of skills. This also, however, means that Spiegelman never slips into an over-sentimentalised version of events, so that we can also see that his depictions of his father's Holocaust experience are also as horrifying as the way they are depicted.

Another important issue that Maus raises is that of how far reaching the horrors of the Holocaust actually are. After his father has died, Spiegelman depicts himself as visiting a psychiatrist, suffering from depression, and admits that there is a sense in which he feels guilty that his parents had to live through the Holocaust and he did not, a kind of second-generational survivor's guilt. There is also the sense that he also feels guilty for making money and gaining a great deal of success, essentially out of his parents' suffering. I found this complex really fascinating, and I find myself wondering if this is a common feeling among the children of Holocaust survivors- that they of course wouldn't want to live through the kind of suffering that their parents did, but that they paradoxically also feel guilty that they didn't, and as a result anything that they suffer will never be as bad so they have to, in a sense, repress it. There doesn't seem to be a lot of research into this, but it really does interest me (it's my A level in psychology coming to the surface!) so if anyone knows of any studies about this, I'd love to hear about them.

Anyway, back to the book. I always find myself crying any time another family member is taken away, imagining the slow, drawn out torture of slowly losing everyone you hold dear. How many have been lost really becomes clear when Vladek goes through the whole family- one of his brothers has survived, and one of his wife Anja's, and that's it. Everyone else is gone, and the lonely bleakness of this realisation is devastating and awful. It's just another physical reminder of the horrors of the Holocaust, and one that really hits home when you start to imagine the practicalities of how many people each survivor has lost.

In his book, Spiegelman presents people of each race as a different animal- Jews are mice, Germans are cats, Americans are dogs (do ya see what he did there?!). But beyond the basic metaphor of it all being a game of cat and mouse, Spiegelman's aim appears to have been to expose the stupidness of seeing people of different races as all being and looking the same. It is clear that this is not the case, as there are instances where Jewish mice help the Nazis to put other Jews in camps, and where Polish pigs are more willing to help Jews than other Jews are. The basic story here is a simple but striking one- that there is no way you can generalise anything about any race of people, so an abomination like the Holocaust is something that is so illogical and ridiculous that it should never be allowed to happen, for the simple reason that it doesn't make any sense, just as no racism ever makes any sense.

There is so much more to this book than just these few things I have mentioned, and I would recommend that you buy it and see for yourself what you can get out of it. It might be a lot more than you were expecting.
Posted by Laura at 18:03