When I went to New York last year in 2009, there was one place I absolutely had to go. It wasn't the Statue of Liberty, it wasn't Rockefeller Centre, and it wasn't even the Empire State Building (although, don't get me wrong, I saw all of there things too!) No, my number one destination was right here: 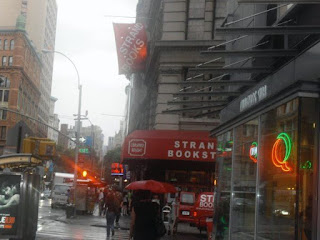 Located on 12th and Broadway, (and if you think that was easy for a little country mouse to find in the rain then you're crazy) this place is basically my (wet) dream. I stumbled across it in a guidebook I had, immediately enticed by it's description "eighteen miles of books" and set my heart upon finding, entering, and falling in love with the place. And that's about what I did! I'm still quite sad that I don't have any pictures of the inside of it, but once I was in there all the space in my brain was taken up going "books! Books!! BOOKS!!!" and it short-circuited a little bit. Suffice to say, I bought way more books than I realistically had room to carry, and packing a few days later was not a lot of fun. I also bought this: 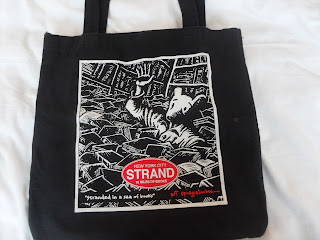 which excited me more than anything else in the entire world, considering my love for Maus (see yesterday's post), books, and, now, Strand Bookstore. It was completely worth the trek from 7th avenue, no matter what my sister (and travelling companion) might tell you!

The other place that I went to for nerd satisfaction was Central Park. I had been here once before, in the drizzle and damp of April with complaining parents, and all we managed to actually see was Strawberry Fields and a few squirrels. This time, then, I wanted to make sure we saw everything the park had to offer. And we did pretty well! My main preoccupation was for seeing the Bethesda fountain, a crucial part of the basis of and plot of Angels in America, my absolute favourite play and miniseries in the entire world; and besides that, well, it's just a really beautiful fountain: 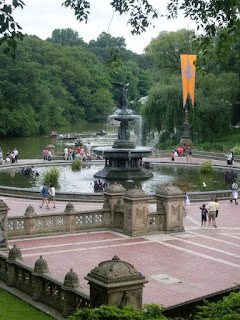 See?! So, after frolicking around here for a while, gleeful in the knowledge that Meryl Streep (and probably lots of other less fabulous people) had been in the exact same place before, I reluctantly moved onto the Shakespeare portion of my Central Park visit. We had a look at the Delacorte Theatre 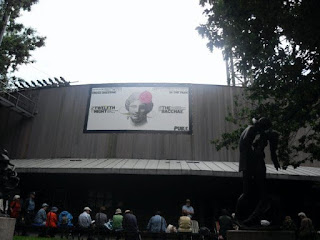 although we didn't see a performance there :( (this face would have been ever sadder had I gone last summer because AL PACINO!! was there doing The Merchant of Venice! Oh woe is me!) There's also a nice statue of The Tempest outside 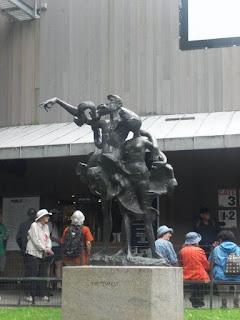 So that was good. After looking at the queue (that seems to be mostly made up of senior citizens...) we moved onto the Shakespeare Garden, which includes all flowers ever mentioned in his plays, along with nice little plaques with the corresponding quotations on: 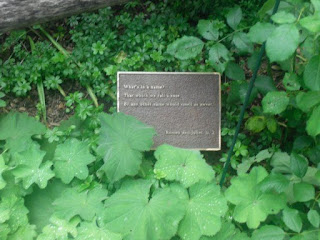 It was nice there. I didn't really want to leave, but there is quite a lot to do in New York, so I had to be realistic. Also, I was forced away!

I've actually just remembered another literary part of Central Park, it's only occurring to me now because I've never been very impressed with the book in question. We went on the Carousel that I can only assume is the same as the one that Holden Caulfield's sister goes on in The Catcher in the Rye, when he seems especially loopy... 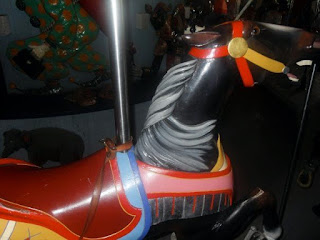 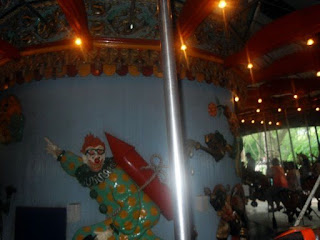 It was a lot of fun, although now that I look back on the photos, it does look kind of creepy...
Maybe I'll tell you some day about why I don't like The Catcher in the Rye (or, alternatively, I'll read it again and finally see what everyone else does in it- here's hoping!)

So, those were the most literary parts of my trip. It also shames me to admit that I went on a Sex and the City bus tour (DON'T JUDGE ME!), ostensibly for the promise of a Magnolia Bakery cupcake that I was bitterly denied on my previous visit (and I had that cupcake, and a brownie. So there!), plus saw so many film locations that I almost couldn't believe they were really there. Damn, I love New York so much... Anyone want to buy me a plane ticket/accommodation/a job so I can go back there? Anybody?!
Posted by Laura at 16:51