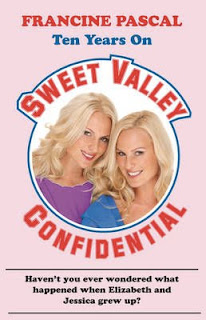 Never has the title I give my reviews been more apt than it is today- I quite literally devoured Sweet Valley Confidential in a day (as in, within 24 hours rather than in a literal day) and, in the process I became about 12 again. I'm not sure if it's possible to completely love a book for nostalgic reasons, whilst also being underwhelmed and sort of depressed by the actual writing itself? If so, that's totally where I am right now!

To be completely fair, I suspect that the writing has always pretty much resembled that of Sweet Valley Confidential, and I just never noticed because I was young and foolish and didn't have a degree in English or anything silly like that. Apart from that though, there were other things I didn't like so much about the book- Pascal clearly has her favourite characters (Elizabeth, mainly, but also Bruce Patman and I think Stephen, to a lesser extent) and then she has characters that she really can't seem to stand- Enid Rollins and Winston Egbert to name but two, and Jessica is clearly her least favourite twin! There is also the bizarre choice she makes in having Elizabeth be a theatre critic, even though she has never really shown any interest in the theatre- surely there are other things to write about in New York City?

But still. While there could be more action in Sweet Valley (most of the things that actually happen in the present happen to Elizabeth in New York) the book is such an amazing nostalgia trip that, if you're a fan of the series, or even just love to hate it, you will probably completely love this book. Despite some interesting relationship decisions that I'm NOT going to tell you about because they're pretty juicy, and Pascal's clear and bitter hatred for certain characters, everyone is basically exactly as you remember them from Sweet Valley High. If these books were real life, this would be considered a bad thing- surely you're meant to mature some from high school?- but since this is exactly how we remember the characters to be, anything else would surely be a disappointment.

Having said that, I feel that there are certain parts of the Sweet Valley canon that Pascal disapproves of, since she chooses to brush over a variety of different events. Chief among these is the entire Sweet Valley University series- new characters from SVU are completely left out, and relationships that, understandably, fell apart in the SVU series are rekindled as if nothing happened, the most conspicuous of which is Elizabeth and Todd's relationship which seemed to be pretty much over (i.e. they hadn't spoken to each other for 2 years) but apparently this book decides to mention such things briefly and then move swiftly on to the way Pascal wants things to be now. In a way, though, everyone changed in the Sweet Valley University series a great deal more than they do in this book, and Sweet Valley Confidential is, in a way, a regression back to high school for everyone, rather than showing them moving on as it sort of claims too.

I feel like I've been overly harsh on this book, and if that's the impression you've gotten from this then I want to apologise profusely. What you've gotten are the after-thoughts of a bit of a reading snob (in the nicest possible way!) whereas, during the reading, none of these things really mattered to me, and I was just giddy being back in a Sweet Valley dreamworld where any problems that anyone has are solved by the end of the book, and everything becomes sunny and wonderful again. Its a nice place to escape to, and more importantly, it remind me so much of a time where the most fun I could possibly have was go to a library and pick up a newly in Sweet Valley High book. If anyone can tell me how to get back to that time, please let me know and I'll take you with me! And we can read Sweet Valley High books forever and dream of moving to California, and having a twin.....
Posted by Laura at 19:49