So, yesterday was the read-a-thon, which was pretty much a megafail for me, which I sort of knew it would be because it was my birthday and all, and few opportunities for reading could be found without someone suggesting that maybe I should be at least looking at the people who were nice enough to buy me lovely things. And then I slept through the last 11 hours of the damn thing! (Birthdays make me tired, especially when I have a bit of a breakdown on them.) But, anyway! We shall not dwell on the failures of the past, but look forward to the victories of the future! Yes! (and there's another read-a-thon in October, I believe, and I am so totally on that!)

Speaking of victories, yesterday was, at least, a bit of a book-win for me! I got 9 books in all, and these form the entire content of my mailbox Monday/IMM this week. Here they are in all their glory: 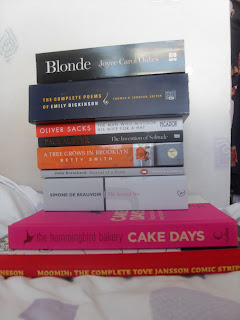 I so admired the stacks of read-a-thon books (the rudimentary first step that I didn't even take, and probably should have indicated my read-a-thon fail likeliness) that I just had to take my own stacks of books picture! Since my camera is of shocking quality, and is something that I should have perhaps had replaced through the wonder of birthday presents, you probably can't see all/any of the book titles. But fear not! I am here to narrate this wondrous photo!

So, starting from the bottom, we have Moomin: The Complete Tove Jansson Comic Strip. I shouldn't really have to explain why I wanted this, but lets just say that if you don't think Moomin and the gang are completely adorable, then we probably can't be friends- I have a framed drawing of Moomin that I did myself in my room, and a Moomin cushion that I made myself (with some pretty significant help from the incomparably talented Frances) and I am about the least artistic/crafty person in the world- this is how dedicated I am to Moomin. Also, the quotation on the back of the book is "I only want to live in peace, plant potatoes, and dream!" which is about the nicest thing ever! If you're still unconvinced with Moomin and his amazingness, then I'll let you know that Alexander Skarsgard plays the voice of Moomin in 'Moomin and the Comet Chase', which, as a combination is so much cuteness that I could probably die!
Ahem. That's probably enough Moomin love for now. Next up from my apparent obsession is The Hummingbird Bakery's new recipe book, Cake Days, which I am pretty excited to bake just about everything from, and which looks even better than the original Hummingbird Bakery Cookbook which I got for my 20th Birthday! Mmmmmmm...
Next up is The Second Sex by Simone De Beauvoir, which, I'm pretty sure I don't have to explain to you, but if you want a quick description: Feminism=yay!, women=yay!. As for the rest, I'm not really sure, because I got it out of the Uni library once, started reading it, then remembered that I wasn't doing a Womans Studies degree (if one can even do such a degree in England) and had to set it aside, permanently and with a huge sigh because I had to do actual work. But now, my time has come!
The teeny book resting on top of Simone is Journal of a Novel: The East of Eden Letters by John Steinbeck, the most expensive teeny book ever, but one I had to have to get nearer to finishing my Steinbeck library. Also, I really really like reading the private letters and things of celebrated people, as if it will give me the key to their excellence, and hence the way I can unlock my own. This is always the hope anyway, not that it's happened yet- I'm still holding out hope though!
Next up is A Tree Grows in Brooklyn by Betty Smith, a book which I asked for purely on the basis of an amazing review on a blog that I now can't remember (although if you've written an amazing review of this book, then it's probably yours!) Days after it being ordered, however, I read a pretty mixed review of it on another blog... So I guess I'm going to have to read it and tell you whether it is really good or not!
The dark book on top of Betty is The Invention of Solitude by Paul Auster, an author who I have been in love with since I read Moon Palace, and who really never gets old for me. The Invention of Solitude will be the first of his non-fiction that I've read though, so I guess anything could happen to my opinion of him!
Above Auster is The Man Who Mistook His Wife For a Hat By Oliver Sacks, a book that I can still remember my college Philosophy teacher recommending when I was 17, and a perfect example of how much I rely on the advice on teachers who I still think of as knowing way more than me, even on something as personal as book choices. I have also read an article by Sacks in The New Yorker that was exceptionally well written for someone with an MD, and so that spurred this book choice for my birthday. Also, the title is clearly just hilarious!
Above the good doctor (don't worry, I'm nearly done!) is The Complete Poems of Emily Dickinson (guess who that's by) which is a bit of an odd choice by someone who claims not to like poetry as I always do. But, then again, I do constantly backtrack on this also, and it goes something like this "EURGH, I hate poetry! Except for Dickinson. And Whitman. And I guess Wordsworth. Oh, and Shakespeare was a pretty good poet too. Oh and I LOVE The Rime of the Ancient Mariner..." and so on. So yeah, I guess I sort of do like poetry...
And, right on top of the pile is Blonde by Joyce Carol Oates, just because 1) I love me some Joyce, and 2) I love Marilyn Monroe, and I'm pretty sure this is sort of a fictional biography-ish thing about her, which is something I've never really had any experience of before. But I'm excited to give it a try!

Phew! That was pretty exhausting! But yeah, these are my birthday books, and I love them all already. Expect excitable reviews in the near future, and never again for me to have such a full mailbox! How about you? Did you get any exciting books this week? Or, even better, anything to do with Moomin?! Let me know down below!
Posted by Laura at 18:13