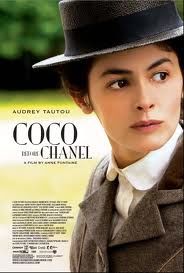 Wooo, the film reviews are making a comeback. I feel like I haven't watched a film in an exceptionally long time (mainly because I turn on a computer and my brain is sucked into it for about a million hours), so I feel pretty happy having just finished Coco Avant Chanel. Plus, as an added bonus, it's a French film, so I even got to read at the same time! This wasn't exactly helpful when I tried to text during it though- I may have had to rewind (or whatever you do to a disc) quite a few times...

The main thought in my brain during the film, apart from 'wow, french sounds so pretty...' was, 'oh my God, how skinny is Audrey?!' I mean, really, I'm kind of worried about her! Is it just me, or did she used to have a little bit of meat on her bones, say in Amelie (which is one of my very favourite films)? I've just realised how disgusting and sexist it is of me to treat Audrey as an object first, and as a woman second, and for that I apologise, I'll get onto her acting later, but I wouldn't have brought this up if I didn't think she was actually far too skinny to be healthy- does anyone else feel this way?

But anyway. On the whole I pretty much liked Coco Avant Chanel- it was French, there were clothes, and Coco Chanel seems like someone I would get along really well with- she's sort of moody and quiet and brooding, but if you get on the right side of her she'll be your friend forever. This is where I talk about Audrey's acting ability- she's pretty incredible. Every feeling is portrayed on her face; you know when she is bored, when she is ecstatic, and every emotion in-between, and the woman has range too- Coco couldn't be more different than Amelie, say, and yet you completely believe and love both characters, practically forgetting that the same actress plays both.

The plot is pretty straightforward- ambitious girl dreams of escaping her life of poverty and moving to Paris, by way of a rich gentleman, and an Englishman who works for him. Emancipated it is not exactly, but Chanel has little other choice, and it is fair to say that she holds her own amongst these men who pay for her. At times I was reminded of Anna Karenina, in that Etienne is an integral part of French society that reflects so well the Russian society in Anna Karenina that I disliked so much. This is perhaps why some of the film felt hollow to me, because the world portrayed is one in which nobody does anything of any use- as Coco says disdainfully at one point, "Nobody here works,"a position so far removed from how she sees her life going.

Since this is a biopic, it is difficult to criticise the plot in itself, since (I assume) these are the things that actually happened. I could only really be critical if I was an expert in Chanel studies, which, I assure you, I'm really not! One thing I would question, however, is the choice of the filmmakers to focus on Chanel's early life. I realise that the film is called Coco before Chanel, and so that's what they're going to be looking at, but at the end there was a little 'oh yeah, Coco worked for the rest of her life, competing with men' blah blah blah, when all they've actually shown in the film is how dependent she had been on men (albeit also being an incredible personality, and having strong convictions). I guess what I'm basically trying to say here is that they could have looked at at least a little bit of that strong woman stuff, rather than just focusing on her dependency. But I guess that's just me being picky and feministly crazy...

So yes. On the whole I would recommend Coco Avant Chanel, because it's entertaining enough and Audrey Tautou completely shines, as she always does when she's in a film (yes, I have a little bit of a girl crush on her). It's not the most intellectually taxing film, and it won't keep you on your toes or anything like that, but it's perfect for a bit of light entertainment. As long as you like subtitles.
Posted by Laura at 00:16