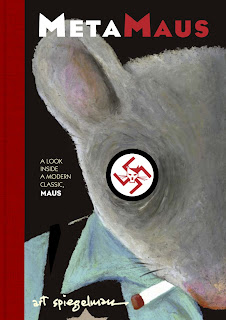 
Describe MetaMaus in 3 sentences or less.
MetaMaus is basically one giant interview of Art Spiegelman, the creator of Maus, in which he describes everything about Maus's creation, from talking with his father to public reactions and everything in between. Interspersed with the text are many many drafts of drawings in Maus, as well as photos of Spiegelman and his family, inspirations for his work, and other awesome and useful things like that. It also includes a transcribed script of the original taped interviews with his father about his Holocaust experiences.

Wait, so Maus is a comic book about the Holocaust?!
Yes. It's amazing and respectful so get over it. It also happens to be the first book I reviewed on here, see?

Oh, cool. But does Maus really need a whole book dedicated to describing its creation?
You know what? I wasn't sure that it necessarily did, but I found the entirety of MetaMaus so interesting and enlightening that it was really worth reading, plus I learnt a lot more about things in Maus that I never would have noticed if they hadn't been pointed out to me. Plus, the dude spent like 13 years writing and drawing Maus, so I think it's fair for that process to be documented now.

So what were some of the new things that you learnt from MetaMaus?
One of the most interesting things to me was the idea that Art and Vladek in the graphic novel are not necessarily accurate representations of the relationship between the two actual people. I mean, I got the impression that it's a pretty close match, but at the same time, a lot of the way it's presented was Spiegelman expressing his confused feelings about his father. As well as this, there's TONS of technical comic book stuff in MetaMaus that I never would have noticed in Maus (things like little details in pictures, and layout details that actually mean more than you'd think) that have all enhanced the way I'll look at Maus.

Cool! But, what was your favourite part of the book?
The interview was all fascinating (I stayed up late reading MetaMaus for at least 3 nights) but I think my favourite things were the drafts of different panels in Maus. It was sort of amazing seeing things go from a really rough drawing to the finished product, and there's actually a page which describes all the different stages just ONE panel went through (there are SO many). I found it fascinating because, firstly, it's not something that you'd get to see if you were looking at the process of novel writing, and also because I was just so grateful that Spiegelman didn't give up because fuuuuuck the amount of work he had to do!

So, it's about a graphic novel that's about the Holocaust, and, even more depressing, it's a true story of the Holocaust. Not a lot of lols, huh?
Well, not millions! But I firmly believe that Art Spiegelman is a funny guy, and there are a few moments where I was like 'That. Is. Excellent.' My favourites? Where he talks about talking to a German critic who asked him "Don't you think a comic book about Auschwitz is in bad taste?" and he replied "No, I thought Auschwitz was in bad taste..." and that sound you just heard was me applauding. And the other thing which made me smile was, on this whole timeline of significant events, Spiegelman thought it necessary to include his appearance on The Simpsons in 2007! I just love that The Simpsons is this like massive cultural achievement thing!

Dude, you're so chipper. So, is there anything you didn't like about MetaMaus, Little Miss Cheeryface?
Hey... There's no need to be so grumpy. And basically there wasn't, except that the transcript of the original interviews at the end felt a little bit filler-ish, but at the same time it did make me appreciate how Spiegelman's drawings helped his father's narrative come alive. So there's that. Do you want to hear about something that was totally a downer in MetaMaus, grumpypants?

Yeah, go on then.
Towards the end, there's a bit about the Spiegelman family tree, and it's shown with everyone on it, and then shown with blank spaces for everyone who was murdered during World War II. And there are a lot of blank spaces, and this is just one family and it really brought home just the massive horrifying giant scale of the Holocaust. Awful awful awful. Look: 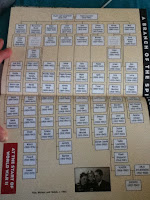 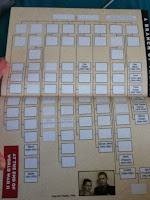 So, I haven't read Maus. Will I still be able to enjoy MetaMaus?
Not really. I mean, you'll get the sort of gist of what happens in Maus from MetaMaus, but its main focus is on the process of creating it rather than on the story, and when the story is brought up, you basically won't know what's going on. And dude, you should really read Maus anyway! It's incredible! And it won a Pulitzer Prize, what more do you need to know?

Dude, chill! I'll read Maus, fine!
Good. And then read this afterwards, because really it's a must read if you're a big big Maus fan. Which I am, and therefore it was perfect.
Posted by Laura at 17:25