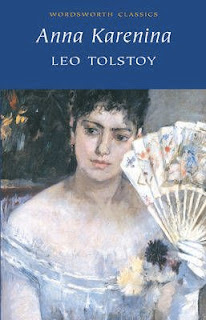 Wow. Just wow. It took me about a million years to read (actual time: about the whole month of March, and maybe a little bit more too), a lot of moany tweets, and weeks of aspiring to finish this behemoth of a novel, and I finally did, by powering through for my whole Saturday afternoon (I couldn't actually think of a better way to spend it!)

So, in spite of all this moaning and sighing and negative "I'll never finish it ever because it's just too long!" thoughts, I really and truly loved Anna Karenina. Tolstoy has reaffirmed my love for Russian authors that Nabokov awoke with Lolita, and that I'm totally going to have to continue with Crime and Punishment (having not got my hands on a copy of War and Peace yet). Anna Karenina is huge, but within it's hugeness, it just says so much- about society, about the peasants, education, Russian law, attitudes, lifestyle; and all of this is just seamlessly integrated into a plot that always keeps you interested and engaged, and most of all caring about what happens to the characters.

So, let's talk about the characters, shall we? I had heard a lot of really negative things about Anna before I started reading, and at first I didn't really see anything to complain about with her- she's pretty nice and lovely looking (apparently an important trait to have in Russian Society in the 19th century) and everyone seems to adore her, until she has the misfortune to fall in love. With someone who isn't her husband. And with someone who her new best friend has set her heart on (poor Kitty!) My feelings about her pretty much go downhill from here, and while I sympathise with the familiar literary theme of forbidden love and loveless marriages, I still can't really support Anna because she is being completely and utterly selfish, and after all that isn't even happy. Vronsky (the man she falls in love with) is less blameless in the whole scenario, being a bachelor, and not having to return Kitty's love for him; but I almost like him less- he really is very selfish, and hardly thinks of Anna at all, even when he is loving her. I also just generally find him boring, the kind of man who doesn't really understand politics or anything important, and more pertinently, doesn't care that he lacks these interests. His main interest, I found, was himself.

If you think I'm being too harsh on Vronsky than you may be right, but this is only because I am genuinely in love with Levin, about as much as I have ever been with any fictional character. (he's just pipped Luke from the Gilmore Girls on my fictional men to marry list- yes, that is an actual list I have made) He is honestly so perfect- shy, unsure of himself, a deep thinker, a worrier, and reading his thoughts at times felt very familiar to me- not that I consider myself as awesome as Levin, of course, but just that some of the things he thinks deeply about have also concerned not just me but, I'm sure, everyone who isn't just wondering when the next episode of Jersey Shore is on (or whatever the kids watch these days, I don't know!) Religion, the meaning of life, the right way to work, the right way to live- all of these things occupy Levin, and I completely and utterly love him for it. The description Tolstoy has of Levin while he is awaiting the birth of his child seemed to be so true and likely to me that I was grinning the whole way through- his anxiety, and then a bit of normalcy, and then back to worry and pacing again- it was pretty much genius, and one of the realest things I can remember reading.

Another thing that struck me with Anna Karenina is how much I kind of really like, but then also dislike Russia. Let me explain. I love how completely educated everyone seems to be, how everyone can speak Russian, French and English, and converse sensibly on practically all matters. It seems like a really amazing culture to be in. But then, there are the things that really annoy me. The fact that Society (that's with a capital 'S') depends on being seen with the right people at the right time in the right places, and that everyone just flits around everywhere, without actually achieving, or really even doing anything. At one point, I did begin thinking, 'No wonder they had a revolution! The peasants got sick of the rich people having everything and doing nothing with it, and decided that enough was enough!' Mind you, life for the peasants pretty much sucked with Communism as much as without it, so Russia has apparently just never had a fair class system- there is very much a separation between the haves and the have-nots.

But anyway, back to the story. So, another reason to love Levin is that he more or less shuns Society, preferring to stay in the country and actually work (there is a section where he finds actual labour pretty much the most satisfying thing he's ever done), and even when he is in Society, he never feels fully comfortable there. This is in stark contrast to Anna, who is necessarily shunned from Society (for leaving her husband and taking up with Vronsky, although interestingly not for having a very well known about affair with him) and this, at least partially, leads to her rather unpleasant breakdown- being unable to occupy herself with petty society matters, she spends the entirety of her time questioning how much Vronsky loves her, or whether he does actually love her at all, irrationally ignoring all the signs that he does and twisting everything to convince herself that she is unloved. It was really very taxing being in Anna's head through all this, because you just want to shake her and go 'Stop being such a fucking idiot!' but alas, you can't, and her ending is inevitable, although still fabulously tragic!

The supporting cast of characters in Anna Karenina is one of it's biggest strengths- apart from the two main couples, there is a whole host of family members, servants and other people in Society that mean something interesting is always happening. Even the minor characters are still extremely interesting- I still vividly remember a lawyer that Karenin (Anna's husband) has a one-chapter interaction with, because I found him pretty hilarious! Of all the 'supporting' characters though, my favourites have to be Oblonsky (Anna's brother) and Dolly (Kitty's sister and Oblonsky's wife). Obonsky is just a ridiculously happy person- he seems to generally go through life not really worrying about what he does and who it might hurt, as long as the things he does make him happy. This means that, quite a lot of the time, he does things that cause Dolly a great deal of hurt, and she is under quite a lot of emotional distress for quite a lot of the novel, loving a man who should never have married, and unable to stop doing so even though he is the greatest cause of her sorrows. There is a quite wonderful chapter where Dolly, able for the first time to escape being a mere wife and mother, thinks about her life and how it could be so different, and so much better than it is. I find it so wonderful that Tolstoy, in the time this was written, was able to appreciate that women don't just get married and are happy forever, but that we are in fact a great deal more complex than this- for a male author to recognise this in the 1860s suggests to me just how extremely extraordinary he really is.

All I really want you to take away from this review is this- 1) Russian literature is really great, 2) You should absolutely read Anna Karenina, not just because it's an 'important' book (although it really is), but because it is wonderfully written, the characters are so well drawn that I talk about them as if they are real people, and it is just one of the greatest things I've ever read. Please don't let its size intimidate you either- even if it takes you a whole month to read (ahem), it will still be as potent and amazing as if you read in mere days. And who knows, Levin might even allow you to have a revelation about the meaning of life or something like that- and wouldn't that be wonderful?
Posted by Laura at 21:51