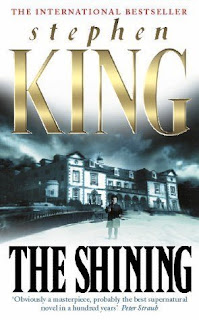 Well, I'm still trucking through with Anna Karenina, but Stephen King books just seem to be so much more alluring... I'm very very bad, but I don't even care- I will defend Stephen King and his artistic/literary merits to the very death (probably my own, with a large heavy copy of Ulysses swung by some book nut...) But anyway.

The Shining is a complete masterpiece. Some of the things that you might think are in it, like the creepy twins in the hallways, 'all work and no play make Jack a dull boy', 'Here's Johnny!', the maze and elevators filled with blood that must have cost so much to film that it had to be used 3 times for no apparent reason; are actually not in it. Also, I really hate the film, apart from the whole Jack Nicholson thing (i.e. his appearance in it), even though I probably wouldn't have cast him as Jack. What you do get instead, however, is something that is quite a lot more frightening- the mental disintegration of a man, controlled not only by his own (alcoholic) urges, but by external forces that want him to sacrifice his own son for the sake of the hotel. It's some pretty scary stuff!

I was, once again, less scared of this book than the first 5 or so reads, which actually does make me kind of sad because I think it means I'm growing up- I really just want to be scared shitless instead of going 'well, that's not very likely, is it?' This will probably all change when I start reading Kings that I haven't actually read yet- I'm sure I'll acquire a completely irrational fear of dogs when I read Cujo, for instance. Anyway, having said all that, The Shining still does scare me in various places- mainly, with the moving topiary animals, the thing that lies behind the door of 217, and, oh I don't know, the complete disintegration of everything that a man once was into a complete monster. That's almost the worst thing of it- having to be inside Jack's head as he tries to reason everything out to himself, always telling himself that he's doing the right thing, and never considering that anything could be his fault (one of the facets of his personality that most leads to his downfall, in my opinion).

And then there is the 'shining' itself- something that seems like a blessing, but might actually be more of a curse. In the very end, though, it does essentially save their lives (sorry if that ruins things for you, but I'm going to let you into a little secret- basically all Stephen King books end nicely, with order restored in the universe- that's just the way they're made!) This 'shining' then, is essentially a precognition, mixed with a bit of telepathy, which can be useful when you want to please your dad by knowing where his missing things are, but not so much when you know that terrible things are going to happen and there isn't anything you can do to stop them, or when your parents' angry or sad thoughts send shudders through you, even in your sleep. Danny's knowledge of the bad things that are going to happen casts the longest shadow over the entire novel, since you are fully aware that there is nothing he is going to be able to do about it because he's five years old, for goodness sakes! So, there seems to be very little that can be done, and you are left just wondering when and exactly how things are going to go down, without much hope for our valiant characters pulling through.

I pretty much want to stop here, because if you haven't read The Shining then I'm probably pretty liable to blurt out one important factor of the story or another, that might put you off reading it. But you should absolutely definitely read it, because it is an absolute classic, and one which might even keep you up nights with fear. More than that, though, it's also psychologically complex, and explores the deep recesses of one man's mind (as well as his son's rather more extraordinary one) which is controlled by more than the hotel- it is also a prisoner of the man's past, and his addiction.

You so want to read it now, don't you?! I thought so. Up next is Rage, the first 'Richard Bachman' book. I realise I could have skipped these, but The Stand is slowly creeping up upon me, and I'm not sure I have the stamina to be in the middle of two extremely long books at once (I love you, Tolstoy! Please, just give me time!), so the Bachman books it is!
Posted by Laura at 17:59