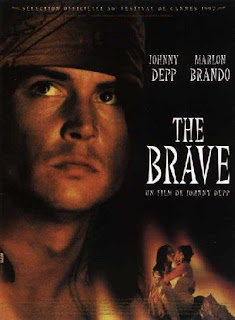 I have now watched The Brave three times in my life, and each time it seems more and more hopeless, and to have so fewer redeeming features than ever before. This is not to say it is a bad film- on the contrary it's a pretty good film, especially from a first time director (Johnny Depp, who also stars), but it is also incredibly difficult to watch at times.

It is especially difficult for me, a fully paid up Depp Devotee (if you don't believe me, check out this guest post I did where I fully confess the depths of my obsession) to watch his character continue living, knowing that his time on earth is limited to one more week. This is actually a fact that remains pretty obscure throughout most of the film- when Raphael (Depp) meets with McCarthy (Marlon Brando), the man who makes snuff movies, there is not really any mention of his death, per se, although you do get an eerie sensation from the scene, but unless you were listening very closely, you may have missed the whole 'I'll pay you for killing you' part of the exchange, and will have to wait until Raphael spells out exactly what is going on to a priest, very near the end of the movie. And what is going on is really horrible.

It seems almost impossible to understand why someone would sell themselves, their entire life, for $50,000, until we follow Raphael home, and understand exactly what he is dealing with. He lives adjacent to a rubbish dump, his family essentially has nothing, and there is nothing he can do to help them. All he has to offer them, or so he thinks, is the money that his death will bring, so that they can move onto a better life somewhere else. The tragedy of this though, is that throughout the film, in his last week, Raphael proves to the audience just how indispensable he really is to his family, and even to the community at large- we never get to see how they would get on without him, but in my mind it wouldn't be very well- he has so much heart and soul that he would be missed a whole lot more than he could possibly imagine.

So, brave? Unbelievably so, yes. But what could be even braver is sticking around for his family, and keeping on trying, because knowing that he died so that they might have a better life is not something that his family should be expected to have to live with. I mean, how could they? Taking the money and knowing it is a replacement for her husband, and her children's father, is something that his wife shouldn't have to deal with, especially since she tells Raphael earlier in the film that she wants him to spend more time with his children, not none at all. In the book, or so I have read being unable to find a copy of it anywhere at all, Raphael has signed a meaningless contract and his family are not entitled to any money at all. The film thankfully doesn't allude that this is the case, especially since Marlon Brando's character is made to seem like a friendly murderer! But that ending is an especially horrific one, making Raphael's sacrifice for absolutely nothing. The film at least grants him a slightly more dignified end.

There is actually quite a bit more to the film than what Raphael has agreed to, and considerations of his mortality, but it is really hard to focus on all of these things without also thinking 'Oh nooo, he's going to die soon' *sad face*, or at least it is for me. I happen to know that this film has never been released in the US, I think because some people didn't like the way it portrayed the failures of the government to protect Native Americans (or something like that, as you can tell, I'm a little shady on the details) but if you've been able to see it, then I'd love to know what you think of it. Did it just put you in a deep and unabating depression for the duration of the film, or were you able to appreciate Raphael's final days the way you have to hope he did too? Let me know in the comments! 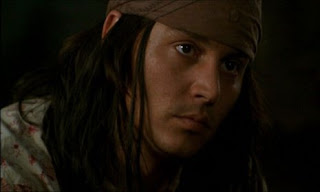