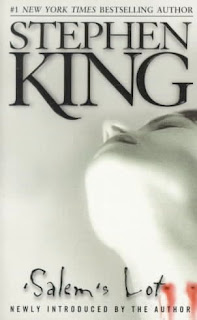 Continuing down my long and lonely Stephen King path, I come to 'Salem's Lot, his second novel. I remember that the first time I read this, I always had to stop reading a fair amount of time before bedtime, because otherwise I feared I wouldn't be able to sleep. Returning to it, I actually don't find it all that scary anymore- I love it for its story and characters, but since I know who survives (i.e. hardly anyone) and who doesn't (i.e. most characters) there is not that much tension left in the story. I also only last read this about a year ago, so I think it was a bit early for a re-read, but that's not the book's fault, and I still love it dearly!

So, 'Salem's Lot is set in this small town in Maine, where, it seems, nothing much has really ever happened, and the hot gossip is all about this guy who died years before and who was possibly a member of the mafia/devil worshipper. Ok then! The importance of this guy, Hubert Marsten, cannot be overlooked, however, because it is put to the reader that his evil deeds may have been absorbed (or something) into the walls of his house, making it a totem of evil in itself. I mention this because, not only does this turn out to be true later when the pinnacle of all evil in the novel moves in, but also because it is something that King returns to a fair bit in his novels- evil can be contained within a place, meaning that the place/building is always going to be a hotbed of evil happenings, unless something is done to break the chain, which is where King's valiant heroes come into things! I am thinking, most specifically, of The Shining and It here, but there are countless other examples in his work.

Not that this is necessarily a bad thing, because it is always undertaken in a fresh and thrilling way (or at least I think so) and 'Salem's Lot is no exception. Another early theme that develops here is the writer as the protagonist, a little thing that Stephen King likes to do because he is presumably following the premise that you should write what you know (even if your book is all about monsters, the bits that aren't  should be what you know, I suppose). This writer, Ben Mears, meets a girl, annoys the girl's mother, charms her father, meets some more townspeople, and then slays some vampires. Just what you want to be doing when you're trying to write a book, I'd imagine! What I really find interesting in 'Salem's Lot, though, is that there is a great deal of build up to events, and the town is so fully described, all it's intricacies and delicate relationships explored, so that when things do start to happen, you are fully aware of exactly what is being destroyed. I think it's quite masterfully done, although I suppose you could just say that he doesn't know when to start the action and stop going on about the townspeople. But that would be your opinion!

I keep thinking that Father Callahan has a far bigger role in this book than he actually does, mainly because of his totally unexpected, but awesome, reappearance in The Dark Tower series of books, but the bits with him in are potentially the most interesting and searching parts of the novel. There is a great deal of discussion about God, and what he can do, or rather what he can help others to do, and there is a discussion of Father Callahan's own loss, or wobble of faith. I think the idea with this is that God can protect you, as long as you have full enough faith in him, but Callahan fails in this and pays for it bitterly, and for this reader at least, pretty sadly. I actually feel pretty sorry for the Father, but knowing what happens to him later on, I am able to at least handle it pretty well!

I think there are flaws in the story, in terms of Susan being pretty important to the story early on, but then essentially disappearing from the story later on, whereas Mark, who becomes extremely important (and is pretty extraordinary) is hardly mentioned until the point where Susan becomes less important. It's almost as if King couldn't handle having so many lead characters at once, something which he becomes much better at later on, but clearly hasn't perfected here yet (and really, why should he have been expected to?)  So, yes, 'Salem's Lot isn't perfect. But it is a pretty damn good vampire story, which does occasionally shock you with a dizzying insight. One quotation from the book that struck me the hardest and has stayed with me is this:


"At three in the morning the blood runs slow and thick, and slumber is heavy. The soul either sleeps in blessed ignorance of such an hour or gazes about itself in utter despair. There is no middle ground."

This just strikes me as being so true- at 3 am, you are either sleeping soundly and are untroubled, or you are awake and something is very wrong either within you or around you, and either way you feel completely despairing and afraid of something that you can't quite put your finger on. Or maybe that's just me, although thankfully I haven't been awake at 3 am for the longest time!

So, that was 'Salem's Lot. I was less scared of it than I was the first time, but I still enjoyed it as much as before (maybe more, because I wasn't also scared shitless). Next up, The Shining, and I think we all know how that ends. Unless you've only seen the movie, in which case you definitely do not know how it ends!

NB: I keep thinking that I'll get to read It soon (it's pretty much my favourite King book) but I actually have so many to go before then! And one of them is all 1400 pages or something ridiculous of The Stand (which I do actually remember as being pretty damn awesome too!) Have I mentioned how much I love this challenge yet?!
Posted by Laura at 17:41