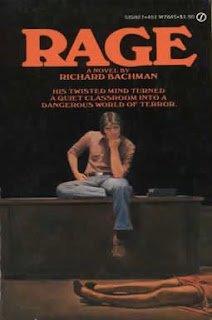 Rage is the first of the books published by King under his pseudonym, Richard Bachman, and, while I was kind of dubious about it because, comparatively, The Regulators, also released under the Bachman name, was definitely not as good as Desperation, the King book it closely parallels; it actually turned out to be better than I had expected. I think that the Bachman name was essentially brought into play by King so that he could write things that weren't necessarily out and out horror, but still retain his own reputation as the king of horror. Having said that, Rage is pretty scary, in a far more realistic way than a lot of King's other books- with supernatural horror, you can brush off a lot of the fear by being assured that it isn't real and can't really hurt you, whereas the plot of Rage is something that could really happen, and so is, in a lot of ways, a fair bit scarier than many of King's monsters.

So, the main character of Rage is essentially this 18 year old kid who has, ever so slowly, lost his mind. It's a terrifying admission for him to make, and I found it especially concerning because what if you did just wake up one day and realise that, after all the crap that's happened in your life, you have just given in and lost the plot? Scarier than that, though, is the idea that someone like Charlie could be lurking near you at any given time, just ready to give in and admit defeat to his own mind. This is a particularly worrying thought because, in the book, Charlie kills two people and takes a whole classroom hostage, something which has happened before, and will surely happen again. Creepy haunted hotels don't seem so scary now, huh?

I was really impressed with the psychological investigations that King imposed on his narrator, and how the entire book was really just a study of all the things in Charlie's life that had led him to this point, just over the edge of sanity, holding a class hostage with a gun. It is interesting that, rather than just stating that all these things caused Charlie to lose his mind, there is also an aspect that suggests that none of these things were wholly to blame, making his insanity almost scarier because it could then happen to any of us. And then, there is the class. They are at first terrified (understandably) but this then changes to something a lot weirder- they can almost identify with Charlie and what he is doing, which leaves us with the implication that all teenagers are just a little bit insane. Having been a teenager not so long ago, I can affirm that this is absolutely the case!

There is one exception to this rule, and this comes in the form of Ted, the only student who stands up to Charlie, and who ends up being the only student that the others come to hate. It is a very odd situation- he is trying to get them out of the room, but they almost don't want to leave- like this is something very important that they have to go through in order to learn important things about themselves. What is very interesting here is that, up until this point, Ted has been basically the most popular boy in school, almost the antithesis of Charlie's high school experience. While this is still the case, their roles are almost reversed when Charlie is holding the gun, as he becomes the most popular boy in the room. It's very strange, and I can only put it down to one thing- in his position, Charlie starts to tell the truth about himself, which is something that so few of the students have ever been able to do, and Ted has never been able to do (which is probably why he remains popular). It's a very interesting reversal, and it especially proves that people are capable of anything (something supported by the very end of the book, which makes even Charlie sick... But you'll have to read for yourself to find out what that is!)

So, Rage is a book about a lot of different things, far beyond just one boy's downfall into mental illness. It's a lot more about the things that teenagers face, and the fact that what they feel often goes a lot deeper than adults give them credit for. I think it brings up a lot of interesting thoughts (or at least it did for me) and is well worth a read as one of Stephen King's less read books. I have just realised that I have possibly given this book a better review than any of the other Stephen King books I've read so far, and so I want to clarify something- this is not as good as they are. Don't get me wrong, I do think it is a good book, but it doesn't give me the heebie-jeebies in the way a lot of other Stephen King books do. I think that, because I love those books more, I criticise them more also, whereas, although I liked this book I didn't love it, so I didn't feel the need to offer it any criticisms at all. Which is something I do with people too. So anyway, just ignore my biased style of reviewing and read this book anyway! Just... read 'Salem's Lot straight afterwards or something, ok?

Next up I'll review Night Shift, which I've already read this year, and don't really feel inclined to read again, so I'll be reading The Stand next, which I've only read once and not for a really long time- I'm pretty excited about it!
Posted by Laura at 15:36