I have decided to do something radical. Something awesome. Something that I have wanted to do for quite a while now.

I'm going to read Stephen King books. 'Woah, that's so out there' I hear you cry, and, well, you just wait a minute you impatient people because there's more. A fair bit more. What I am going to do, is read ALL of Stephen King's books. In order (well, pretty much in order, but not quite, but we'll cross that bridge when we get to it), from oldest to newest. That's a lot of books people!

So, why am I doing this? My sheer love of Stephen King is one thing, and my sheer boredom at unemployment is another, but mostly I just have a fair few unread King books lying around, and that needs to change. Immediately. I'm going to keep track of my progress in the Challenges tab at the top of the page, so if you want to keep track of all the Kings I've read, then that's the place to go! If you want to join me in my crazy/awesome quest, then please feel free to, I'll link back to you and everything and stuff! (If that's at all appealing to you, haha). 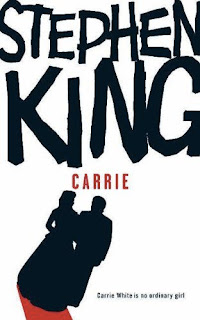 So, I started with Carrie. Stephen King's first published novel, but not his first published anything (He had a fair few short stories published before he wrote Carrie), it was released in 1974, but all the action takes place in 1979. This is something that King does quite a lot, and I always find it really clever and amazing (because I'm easily impressed) he sets it in the future so it's scarier because it hasn't even happened yet! But it will, and soon! Spooky... Like a modern-day Nostradamus is our Mr King. Of course, the fact that it's now 2011 (and hence 4 years until we have hoverboards and hydratable food and other cool stuff like that) makes no difference because you can still consider that this little dating thing must have made Carrie extra scary when it came out!

But is Carrie really that scary? Honestly, I don't think so. It's far more sad than scary, and even when Carrie is at her most crazy and remorseless, I still feel sorry for her, more than I do scared of her. I'm sure this wouldn't be the case if I actually lived in her town, but I don't, and I sympathise with Carrie far more than I do with the townspeople, or the other kids at her school, who have essentially done nothing to help her, and have led her to do what she eventually does, when everything falls apart.

I think this book is written in a very novel way, by incorporating regular narrative with extracts from books, magazine articles, and later on Court transcripts, which add to the narrative by making it clear quite early on that something extraordinary has happened, and that a lot of people end up dying. What exactly this entails becomes apparent as the book progresses, and you can't help but think that the kids at school pretty much got what was coming to them (or, at least, I did, which I'm not sure is the intended message of the book!) Carrie is such a damaged character, having been the butt of all the jokes from her very first day at school, and it becomes clear that all she has ever wanted is to be accepted and liked. Unfortunately for the people who have mocked Carrie, she is telekinetic (kind of like a living poltergeist) and thus she can do quite a lot of very bad things to the people who were very bad to her- whoopsie for them!

Carrie's mother is possibly the one who does her the biggest disservice in the novel, however, by being so ridiculously religious (in a really weird interpretation of Christianity, for example, not having sex even after marriage!) that she never even gets the opportunity to fit in. Apart from that, there is also the mental and physical abuse she subjects her to, and the crazy crazy obsession with 'dirtypillows'... She's probably about my least favourite mother since Livia Soprano, and that's really saying something.

I think that, essentially what King is trying to say with this novel is that you should pretty much be nice to everyone all the time, because you never know what kind of superpowers they might have that could end up with you not so much alive. That was about the most retarded way I could have put that moral, but it's pretty much the truth- a major character is saved because, while she hasn't always been nice to Carrie, she atones for her sins afterwards, which is better than the others who have only shown her cruelty.

To be honest, Carrie could be better. I think that, allowing that it's Stephen King's first novel, it's pretty good; but when you compare it to a lot of his later works, it doesn't really stand up in terms of it's writing and scares- in story, of course, it's second to none, because, let's face it, a not so good Stephen King story is still basically better than everyone else's! Next up is Salem's Lot, a book I already like better than Carrie because there are vampires in it! Also, it's a LOT scarier...
Posted by Laura at 15:53