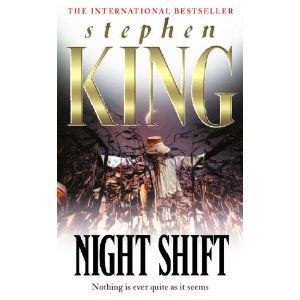 Picture via Amazon
I am cheating just the tiniest bit with this challenge, because I read Night Shift pretty recently (but before I started my li'l Stephen King challenge) and I really can't be bothered to read it again. Not because it isn't good, because it is (for the most part) but I really really want to get stuck into The Stand, which I haven't read for about 5 years (SO excited!)

Night Shift, then, is essentially a whole load of collected Stephen King short stories, a lot of which were published even before Carrie was written, and for the most part they're really pretty spine-chilling, although they're not all strictly horrorful, some are more on the thriller side of things (not the Michael Jackson song, although that would be cool too!) There are, as I think applies to any short story collection, a few duds, but mostly I was impressed by the broad scope of horrors that King covers in the 20 stories contained in this book. Since I literally have no idea how to review short stories, I guess I'm just going to point out my favourites, and the ones you should avoid if you're in a big hurry to finish the book (because I would never otherwise advocate skipping a short story, even if it is bad!) So, here I go!

I'll start with the least good (because doesn't that sound so much better than bad?!) stories, or at least the ones I enjoyed the least. I found that 'Jerusalem's Lot' a kind of pre-cursor to 'Salem's Lot, was overlong and really irritating to read, but at the same time I did appreciate (in a kind of grudging way) the gothic conventions that King stuck to in this story. It's just, I don't really love gothic novels, so this one was never really going to work for me! 'Trucks' and 'The Mangler' I also found a little bit annoying, because they basically make machines the enemy, which for some reason I find a little bit silly (Christine is not exactly my favourite Stephen King novel) and much less scary than evil clowns or diseases or vampires.... That's just me though! And then there was this one story called 'The Lawnmower Man', which I don't even know how to describe- lets just say that it was kind of mental, and not at all scary... unless weird people who eat grass scare you, which I suppose they might, in real life. Or maybe not...

Then there are some really really good stories. In fact, most of the ones I liked the best were not the traditionally 'scary' ones, but more the thrillers that just gave me little shocks of excitement. 'Night Surf' I liked as a kind of celebration of youth, and also a tiny little glimpse into what would later be The Stand, as a group of teenagers act exactly like teenagers in the face of their almost certain deaths from this superbug. This was a kind of bittersweet story, and left quite a big impression on me afterwards (also, I really like The Stand, have I mentioned that yet?) I also really liked 'The Boogeyman' because it was just perfect- playing on childhood fears, but making the boogeyman actually real, even though no one will believe the narrator (and I guess it's your choice whether you do or not too). 'One for the Road' was also pretty pleasing, as a post-'Salem's Lot story, of this poor man who has come across some very scary things in his travels out into Maine... And then there was also 'Children of the Corn', which I really enjoyed because apparently weird corn-god worshipping children really float my horror boat (they're actually pretty freaky, I wish I could explain to you how... let's just say, in their town, you'd be dead already...)

So, these were the relatively traditional horror stories that I enjoyed a fair bit. But then there were also the thrillers, that made me feel far less uneasy, but which I also enjoyed thinking about a fair bit. Top of probably all of these was 'Quitters Inc.' a creepy little tale of a revolutionary way to stop people smoking that I'm pretty sure should be implemented everywhere (except it really shouldn't, because it's really horrible and scary!) I just loved the way it all unfolded, and I'm pretty sure you would too! I also liked 'Battleground', a story about a toy that comes alive and attacks this man in his own home (I know, I don't like machinery being scary, but this was different somehow) which I also really enjoyed. There was also 'The Ledge', where this man has to walk around the edge of a building, a lot of stories up, on a tiny ledge, but then turns things around on his tormentor. This wasn't a horror story, but it definitely scared the crap out of me because that really is the kind of stuff nightmares are made of. Undoubtedly the saddest story in the book was 'The Woman in the Room', where a man makes the decision to euthanise his mother (the woman in the room of the title, signifying that she has become something unrecognisable to her son), which I actually find even sadder now having seen You Don't Know Jack, and considering a lot more than I have for a long time the ethics of euthanasia. Left in an impossible situation, should this man help put his mother out of her misery, or keep her in a position of unendurable suffering? I think the answer to this is pretty obvious, but that's just me.

So, Night Shift is a bit of a mixed bag, really. The emotional, mixed with the scary, mixed with the stories that make your heart beat a little bit faster, and they all combine to make a pretty good set of short stories. Hopefully when I get to the next collection on the list (Which I think is Skeleton Crew) I will be a much more adept and amazing reviewer of them for you. But I wouldn't hold your breath! The Stand next- expect a review in about a month guys (it's almost double the size of Anna Karenina! But probably a lot easier to read...)

Update: Oooh, almost forgot to let you all know that I've done a guest post for Christina over at Reading Thru The Night, which she assures me will be up tomorrow, so go over and check it out if you want to read my opinions on Johnny Depp! (hint: They are very positive) I hope you all enjoy!
Posted by Laura at 19:08