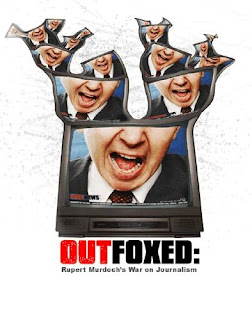 My dad has recently become addicted to Fox News. It's all my own fault, considering that I was the who told him how hilarious it is (which, it really is), but I've fallen on my own sword in a way- every ad break, he's turning over to watch the warped, Fox News view of the world. Now, since we're about the most liberal household that has ever existed, I'm not too worried about this warping his delicate political mind- I'm just getting irritated by the awfulness of it all.

Having said all this, however, watching Fox News over the last month or so has been a pretty good precursor to watching Outfoxed, a documentary on just how evil and insidious Fox News really is. Outfoxed was made in 2004, just when, it seems, Fox News was getting Bush vs. Kerry election fever, which, as the documentary points out, was greatly biased in favour of Bush and the Republicans. As is every Fox News broadcast ever produced. The revelations that come from this documentary are truly shocking- that, in a list of regular contributors to Fox News, all the Conservatives were instantly recognisable names, whilst the Liberals were decidedly not, that they allowed a man with very close ties to the Bush campaign to interview Bush, when CNN wouldn't let a producer anywhere near the campaign because his wife was a lawyer who had worked with John Kerry. Everything they do is based on making Democrats look stupid, and Republicans like the only ones who can save the world, and there is absolutely no journalistic integrity there- in fact, it seems to be wholly discouraged!

One incident that continues to shock me is when Bill O'Reilly 'took on' the son of a man killed in 9/11, because he had signed a petition that opposed the war in Iraq. Rather than treating him with any kind of respect or compassion (assets which, I fear, O'Reilly is severely lacking in), he instead starts attacking him, telling him his dead father would be ashamed of him, and bringing his mother into it for no good reason. It's actually really quite painful to watch, especially when this man says that he was asked to leave the studio because if O'Reilly found him in the hallways, producers were afraid that he might end up in jail. I just have so many problems with this, not only for the lack of respect that O'Reilly shows his guest, but also for the assumption that someone personally involved in the 9/11 attacks would unquestionably have to support a war that would do more harm than good, and would really not be a fair and measured response to the attack on America.

So, ever since I watched part of this documentary in my media class in 2006, Bill O'Reilly has been my own personal villain. But, having been exposed to some more recent Fox News madness, my focus has shifted slightly to the madman that is Glenn Beck. I mean, honestly, what is wrong with this man? He just says whatever mental thing comes into his brain, and then everyone is just meant to accept his word as truth, like he's Moses or something! He also seems to talk about a 'New World Order' a lot, which I'm pretty sure is a term used by crazies and fringe groups, to justify having a million guns in their home to protect against I'm not even sure what! He also seems to have this giant ego- One night when we were watching, he seemed to accuse the President of having some kind of conspiracy against him by scheduling his speeches at the same time as his show! I mean, how dare he, right? He's only the President of the United States, it's not like he's Glenn Beck or anything! The man is an absolute joke, and I would be able to laugh him off, except that it seems like people actually listen to him. Obviously the large majority of people also see him as an absolute joke, but enough people take him seriously to make him kind of dangerous. The Tea Party, anybody?

Outfoxed ends with something of a call to arms, an urging of the audience to report to the FCC when they don't like something they hear on Fox News (or, in fact, any network) and to join together to protest the things that they are saying that are just lies (for example, calling themselves 'Fair and Balanced' when they are anything but). I don't really think that this has happened, and in some ways things have got even worse, although they have also gotten better, in my opinion. Things that have gotten worse include the fact that Glenn Beck exists and gets to say things on TV, the Democrats get even more of a bashing now that they are in power (they keep talking about the Wisconsin State Senators who left the state, calling them dodgers or whatever, but not seeming to understand that they left so they wouldn't lose a vote on something that they, and the people feel very strongly about). There is, however, part of the documentary that suggests that the other networks kept trying to become Fox News, talking over contributors and just generally lacking any kind of journalistic integrity- I like to think that this downfall has slowed down somewhat, and it certainly has judging by what I've seen of CNN and the like, but regardless, there is the internet now- does anyone (apart from my dad) even watch news channels anymore?! I think also that people (sane, level headed people) are now more aware that Fox News is the joke that it is, and so are less inclined to take it seriously, or even watch it. Or, at least, I hope so...

So, Outfoxed is a little outdated, yes. But what it says is still relevant to what Fox News is still doing today, i.e. killing journalism, so I think it is still worth watching and considering today. Can you believe I got through this entire post without saying Rupert Murdoch is EVIL?! I can't, and it has been especially surprising since I say it on almost a daily basis, without the prompting of a documentary. But anyway, it's out in the open now- Murdoch=pure evil!
Posted by Laura at 13:49