Devouring Books: The Simpsons and Philosophy by Various Authors 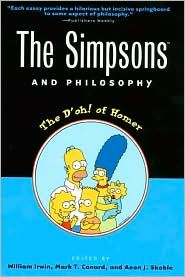 As I think I've mentioned before, my degree was in English and Philosophy, so this was essentially the best book for me to read ever. Or at least, it seemed that way. I'm not going to say that I didn't enjoy the essays in this book, because that isn't the case, but nor can I say that all of them were enjoyable to read. In fact, some of them brought me out in a cold sweat, the likes of which has not been seen since I had to do a compulsory unit on Kant and had to read some of the stuff he said (stuff which, according to my old philosophy teacher, he wrote when he was senile. Try deciphering that shit). I didn't really enjoy the sweats, mainly because I was meant to be reading this book for fun, while also applying my super philosophy skills to what I was reading. I wasn't expecting to have to try and read indecipherable things, or be treated to things that I didn't even understand when I was actually doing my degree! But still. I'm going to talk about this book like a sensible person, and then you can decide for yourself whether you want to be exposed to its delights and struggle through its horrors! (Stop me if I'm being a tad bit dramatic...)

Lets start with the good bits (also known as, the essays I could understand). My very favourite essay was 'The Function of Fiction: The Heuristic Value of Homer', by Jennifer L McMahon, for the pure reason that it essentially said everything I tried to say in my dissertation, but better and with a Simpsons theme. That is, it tried to show that fiction can have value beyond merely entertaining us, and can in fact try to instruct us of how to/the best way to live. This is a belief that I hang a lot of faith on, since I read so much and am so often submerged in fiction that I have to believe it is doing more than just entertaining me until my next meal or whatever. The whole of part three, in fact, was pretty interesting, but also easier to understand than the other sections, since it focused on moral philosophy, an area which I always feel is the best introduction to philosophy for non-philosophers since it best correlates with a common sense view of the world. The metaphysical stuff is a LOT trickier (and confusing. Best to just stay away from it altogether, if you ask me).

The second section of essays I also enjoyed, although I felt that they strayed slightly away from philosophy and into other areas of thought, not necessarily a bad thing but not exactly what the title of the book advertises either. I did especially enjoy 'Simpsonian Sexual Politics' though, which showed me that, even though I had never considered The Simpsons as a programme that under-represents women before, it kind of really does- there have been far more male guest stars than female, for example, and women make up about a third of the recurring population of Springfield. Then again, the women do tend to be far smarter than the men, which does seem to compensate for this equality somewhat!

The first section of essays is more character based, and though my favourite Simpsons character is probably (although it tends to change episodically) Lisa, my favourite essay of this section wasn't the one involving her (but 'Lisa and American Anti-Intellectualism' is a really good read too). No, my favourite was actually 'Why Maggie Matters: Sounds of Silence, East and West', for the basic reason that it attributed a great deal of reason and wisdom to Maggie that I have always suspected that she possessed! The basic point of this essay was that while western cultures value speech and communication above all other things (just think of the number of people in therapy!) whereas eastern cultures tend to emphasise the value of silence, in that it grants the individual a greater time to think rather than just blurt out the first thing that comes to mind. This is an extremely appealing view to my quiet little self, and one which I think warrants a great deal of thought.

Now. There is the 4th section of essays. I'm not going to criticise them, because I don't think I'm literally intellectually able to! It all starts off ok, with a discussion of how Marxist Springfield is (not very as it turns out), and I am able to keep up with the argument that the author is trying to make. And then the worst happens. My Critical Theory unit from my first year at university comes back to haunt me, and I am back trying to do a presentation on something which, to this day, I don't understand, and which can still bring me out in a cold sweat when I think about it. This is Semiotics, the study of... I'm still not sure what (for the record, I wanted to do my presentation on feminist criticism. Pah.) After half reading my way through this (i.e. skipping the horrifically difficult bits) I was terribly disheartened and couldn't give 'What Bart Calls Thinking' my full attention. But it seemed to me that this was also a traumatic kind of essay that had very very few Simpsons references, and instead seemed to talk about a tree a lot. I really don't know...

I have just given you a review that bombs right at the end I realise, BUT please don't let this stop you from perusing this book at your leisure. It is made clear right from the start that it is not meant to be an easy book, but merely one that gives an introduction to philosophical ideas, for you to make your own way from and to go out and seek more knowledge. If you have even a passing interest in philosophy, this could be a very very good place to begin. Just... stay away from Part 4, unless you have a Masters degree or higher in philosophy, is the best advice I can give you!