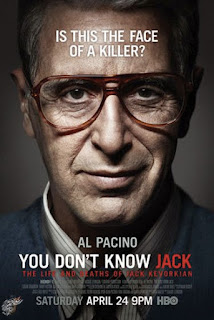 I might have already mentioned just how much I love and adore Al Pacino once or twice (and then a whole load more times) but this HBO TV movie really just tipped me over the edge into basically wanting to worship him and bear many many children for him. I just watched it and thought, what a brave role for him to take on; almost as brave as the actions undertaken by the real Dr Jack Kevorkian who has become somewhat of a personal hero for me, and for the countless people just begging to be allowed to die rather than live on in unendurable agony.

Euthanasia is kind of a no-brainer issue for me, so upon watching this film, I was kind of behind Jack from the very beginning. My main hope for the film, however, is that people who think euthanasia is the most awful thing ever (probably except for abortion) would reconsider their ideas and realise that, the far kinder thing to do to a person in agony is to allow them to die with dignity, rather than continue to suffer. This is a viewpoint that is consistently reinforced by the film, as you see families struggling with the deaths of their loved ones but knowing it is the better option for them, and an attorney that, rather than focusing on whether what Jack is doing is right or not, is just out to get him no matter what, by the end of the film.

The deaths that Jack contributed towards are awful. Not in severity, or painfulness or anything like that, but just in how heartrending they are to watch. The first death takes place in a camper van, and when the suffering woman says goodbye to her husband just before she dies, I cried like a baby. To be in so much pain that death is a better option than the life you are living is so incomprehensible to most of us, that it is difficult to know how anyone can judge these people, or especially Jack, for helping them get rid of the pain. I, for one, would not be so arrogant as to tell these people that what they were feeling is not bad enough for them to want to die, and I don't think anyone else should.

Jack, it has to be said, is not presented as a wholly perfect person in the film, but rather as a kind of distant man who rarely lets people see what he is really thinking. This is not necessarily a flaw, however, but rather a gift for him as an angel of mercy, as it allows him to give those who are suffering the strength to go through with their own deaths without his getting emotional or freaking out about his role in proceedings. This is not to say that he doesn't have a heart or a soul, however, and one of the most emotional moments of the whole film is when he finally opens himself up to his sidekick Janet Good (Susan Sarandon) and tells her what it was like to watch his mother die, feeling helpless and useless when all she really wanted was to die. This is an amazing moment, as you see where Jack gets his inner strength and resolve from, personally pledging that nobody will have to die like his mother did. He is an incredibly brave man, even if nobody else sees him as such.

Much of what Jack does in the movie is to make the very idea of euthanasia open to public debate, and hopefully to get people to understand why he is doing it, and to agree with his reasons. As this is a true life story, this is perhaps something we really should be thinking about and debating, whether between ourselves, or in the courts. If you want my two cents, I think it all really comes down to choice. We have so much choice in this world, where we live, where we work, what crap we buy, what car we drive and so on. But it seems that choice is limited to a consumerist sphere only, and when faced with something actually important, like whether or not we live or die, we just seem to accept that choosing death is not something that we are allowed to think about. Now, I understand the whole sanctity of life argument, but what about when you can no longer see your life as sacred, since you can't move or walk or even swallow and are in constant pain? Should you have to go on living under such circumstances, even when you have no idea how to get through another day? I can't really see any intrinsic worth in being made to do that, but I guess the courts, in most places in the world can. So good for them.

So, basically, subject matter, good; Al Pacino, amazing as ever; authority, bad. How about you? Have you seen this spectacular TV movie? Do you have any thoughts on euthanasia (don't be afraid to argue with me, I love changing people's minds... erm, I mean, debating...)? Tell me all about it in the comments.
Posted by Laura at 17:09