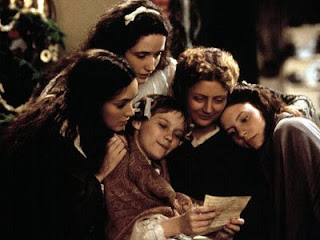 I think it would probably be really easy to be really snide and dismissive of this film version of Little Women (the one with Susan Sarandon and Winona Ryder, rather than that one from the 1930s), but I genuinely just adore this film as much as if it was one I had watched every weekend when I was younger. But it's not (that was Liar Liar, which, due to over-exposure, I now haven't watched for years!) In fact, I first watched it about 2 years ago, where, having not read Good Wives at that point, I was obviously shocked and horrified by the end of things. But I'll get to that later. All in good time.

I think a good basis for my love for Little Women lies in the casting of the film- who would make a better Marmee than Susan Sarandon, tirelessly battling to make her girls not have to merely conform to the expectations of the society of the day? And I can hardly think of a better Jo than Winona Ryder, despite all the suggestions that she's ugly because, let's face it, Winona Ryder ain't bad looking. What she is is an extremely good actress, which she brings into full force when she pretty much embodies the Jo that was in my brain when I read the novel (something which I also have done a lot). Kirsten Dunst is also a really good Amy, always my least favourite sister, and she proves yet again that she is the luckiest child ever, having got into close proximity with Brad Pitt and, in this film, Christian Bale. Ahhh, Laurie! Little Women is also the reason that I refuse to think of Christian Bale as the ogre-like crazy man that the media makes him out to be, and, despite incidents like this, he can still do no wrong, because he will always be Laurie!

So yes, the first half of the film is completely lovely, and, although a few parts of the book are left out, it is still pretty representative of it and it's loveliness on the whole. Marmee teaches the girls that the world is going to be unfair to them because they are women, and there is a whole feminist undertone to the film that just tips it over the edge and makes it truly wonderful. The first time I saw this, in fact, I was learning about Emerson and Thoreau in one of my English units, so the fact that they live in Concord, and go skating on Walden Pond was really exceedingly cool to me (because I am so sad!) As versed as I was in the novel, though, I expected it to end at the second Christmas, where Beth gets her piano and their father comes home. But how wrong I was!

When I first watched the film I got annoyed. I got seriously angry, in fact at the endings for Laurie, Amy and Jo. AND, oh my God, for Beth. This was not the way I thought things would happen in my head, and therefore they were not the way things should have happened at all! In my infinite stupidity, I thought that the producers or whatever has made all these things up, and so they should be completely ignored. I was assured by Frances, purveyor of the film and fellow Bale/Laurie lover that this was, in fact, what happened in the next part of Little Women. So, I read Good Wives, and realised that actually, the second half of the film was pretty faithful, and that I should probably shut up about it. The book, in fact, as books tend to do, added a greater amount of detail to the story, and so made it more plausible that things really would turn out this way. I can't say that I'm not still disappointed (although, with each subsequent viewing it makes more and more sense to me) but I at least appreciate that they didn't completely make it up, just to ruin Little Women for me!

One of my favourite moments in the film comes when Jo is living in New York, trying to join in a conversation dominated by a group of men about whether women should be allowed to vote or not. What she says makes me want Jo to be my friend so so badly,

Mr Mayer: You should have been a lawyer, Miss March!

Jo: I should have been a great many things, Mr Mayer.

First of all, how good is Jo's argument?! The lovely, lovely feminist that she is! Apart from that though, this exchange is also tinged with sadness, as you really consider all the great things Jo could have been allowed to do had she just been born with something else in her underpants, and it also recalls the only time I get annoyed with Laurie in the film (apart from the crazy facial hair he grows) where he is extremely reluctant to go to college, whereas Jo is dying to go. It seems completely illogical that someone who has no interest in higher learning should basically have to go to college, when someone else who would benefit so greatly from it, and dreams of going there also, is barred completely from going. How would this ever make any sense?! The stupid past...

But yes. Feminism, childhood and Susan Sarandon- do films get a lot better than Little Women? No, they get a tiny bit better, but this really has to be up there with some of my very favourite films. I do just love it so! Tell me below in the comments if you hate the various character endings, either in Good Wives (or, I think in America Little Women and Good Wives are all in one book, no?) or in the film. It surely can't just be me, right?!
Posted by Laura at 16:41