This weekend I just had to bake. I spent the whole of Thursday collecting the ingredients, was too lazy to do it on Friday, and so on Saturday I knew I just had to bite the bullet and MAKE THE DAMN CAKE! I am so glad I did: 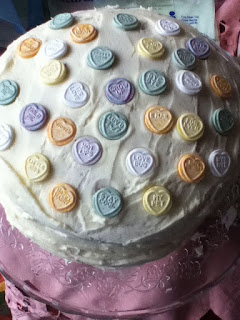 Isn't it so beautiful?! It's a vanilla cake, mainly because people are always requesting that I make chocolate cupcakes, and, to be perfectly honest, I actually am not such a huge fan of the chocolate cake, or at least not so much as I am of vanilla cakes. Also, I have never actually found a chocolate cake recipe that is that great, whereas the recipe for this is the greatest ever! This is actually a relatively good photo of what was an extremely lopsided cake because, you know, I'm far too lazy to bother with any of that cutting cakes so they're actually flat on their tops and so make a completely straight cake crap! So, it may look pretty good from the top, but it is, in fact, a complete mess from almost any other angle! That's not what's important though, the important thing is what it tastes like! And let me tell you, it tastes so so so good. I wish I could share it with you all, but sadly, I can't (a fact which I am secretly happy about...) To give you a better idea of how good the cake tastes, here's what it looks like on the inside: 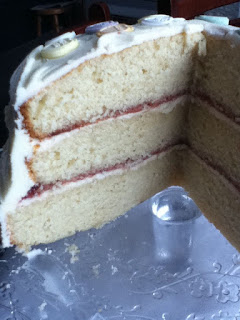 Doesn't it just look amazing?! This is only my second three-tier cake, and they have both turned out fabulously. I think this is probably because The Magnolia Bakery is magic. The cake recipe comes straight out of The Magnolia Bakery Cookbook (it's the one for the Vanilla Birthday Cake, and it works every time- I've made lots of delicious cupcakes from it too) and I always use the icing (or frosting, whatever floats your boat) recipe from The Hummingbird Bakery Cookbook. SO Amazing! Honestly. And then, obviously, I just studded the top with Love Hearts, ostensibly because I had a lot of them hanging around, and, to put it bluntly, I wanted to get rid of them. Into the stomachs of my family mwahahahaha!

So there you have it. I'm not the prettiest cake maker, but I do make things that I definitely want to eat, which is all that really matters in the end! I might just have to go and have another slice now in fact... mmmmm, cake!
Posted by Laura at 20:07