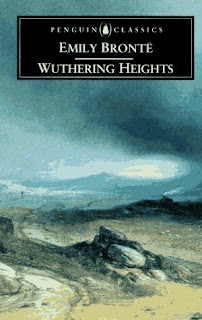 Ah, Wuthering Heights. If you've read it, I think you'll agree it's the perfect end to my Valentines posts, considering all the incest and stalking and obsession involved. It's really very romantic, just in a completely messed up way, and a way that you might not necessarily want to happen to you in real life... But still, Heathcliff? He's completely and utterly irresistible, if you ask me (and Isabella Linton. But she's irritating, so we'll ignore her).

Wuthering Heights encompasses the love stories of many many people, but there are only really two couples where both parties equally love each other, and of these, only that of the younger Cathy and Hareton, her Heathcliff-esque cousin is at all successful. I'm not sure what Emily Bronte is trying to say here, other than 'incest is really cool!', but we all know that these young ruffians are the boring part of the story and it's all about Cathy and Heathcliff, the part that everyone, even those who haven't read the book, seems to know about, at least to some extent. Probably mainly because of this song:

But anyway. That's enough of Kate Bush for now. Back to the novel. Wuthering Heights actually has a very interesting structure, going through a number of different narrators, and thus a lot of different viewpoints, that are all necessary for the story to be told in it's entirety. We see things through the eyes of Mr Lockwood primarily, then through the housekeeper Nelly, and through her we get glimpses of the world through the eyes of Edgar and Isabella Linton (who we ostensibly dislike) and Catherine Earnshaw (who is insane, but at least not stuck up and spoilt). Heathcliff is the one character whose viewpoint we see from the least, and it is perhaps for this reason that he seems the most beguiling and most romantic character in this novel especially, but also in many many novels. He is a deeply flawed character, but this is true of all the characters in the novel (except, it seems, for Nelly herself, but seeing as she is practically the omniscient narrator, we can't necessarily see her as a fully formed character) and indeed of all people. This, perhaps, is one of the reasons Wuthering Heights has remained such a vital part of the popular, romantic imagination- we see parts of ourselves in these characters, and so we want to see what their lives will be like, so we can imagine how ours will turn out too.

If this is the case, however, then hopefully people who have read this book learn from the errors of its characters rather than emulate their essentially miserable lives. There seems to be an extremely low life expectancy for characters in this novel, and the amount of life that they do have is filled with misery, regret, and longing for what they have lost. Isabella and Edgar Linton each marry one of the core couple of the novel, Cathy and Heathcliff, and they pay dearly for their decisions- Isabella is made to live in misery until she escapes Heathcliff's violence, taken out against her essentially because she is not Cathy; and Edgar has to keep living after Cathy's death knowing that she never loved him, or at least not in the way that one would wish to be loved. This is undeniably tragic, but it is difficult (at least for me) to care about these characters, because I just care about Heathcliff and Cathy, and their love. And I know you do too!

Cathy and Heathcliff, then, were steadfast childhood friends, each others protectors against Cathy's older brother Hindley, and generally inseparable. Cathy, however, becomes seduced by the rather higher up lives of Edgar and Isabella Linton over a period of about 3 months, and Heathcliff becomes jealous and resentful, as well he might since she mocks him as soon as she comes home. He also doesn't help to contribute to his own happiness when he storms off, presumably leaving the country, literally seconds before Cathy says some of the most beautiful things relating to loving him that have ever been written;

"he shall never know how I love him: and that, not because he's handsome, Nelly, but because he's more myself than I am. Whatever our souls are made of, his and mine are the same."


"If all else perished, and he remained, I should still continue to be; and if all else remained, and he were annihilated, the universe would turn to a mighty stranger: I should not seem a part of it. My love for Linton is like foliage in the woods: time will change it , I'm well aware, as winter changes the trees. My love for Heathcliff resembles the eternal rocks beneath: a source of little visible delight, but necessary. Nelly, I am Heathcliff! He's always, always in my mind: not as a pleasure, any more than I am always a pleasure to myself, but as my own being."

Seriously. Writing this good should probably be illegal. So, it is clear to us all that Cathy and Heathcliff are soulmates, but for economic, and totally unromantic reasons, they can't be together. This is where their troubles really begin. Cathy does marry Edgar, and Heathcliff then revenge marries Isabella, rendering everyone miserable. Cathy, also, falls apart just a tad, and displays clear signs of narcissism, "How strange! I thought , though everybody hated and despised each other, they could not avoid loving me", showing that however much she may love Heathcliff, she loves herself even more; and then she has what I can only describe as a nervous breakdown, leading to her completely dramatic death. Heathcliff, however, doesn't fare much better in the mental health stakes, considering that his methods of seduction of Isabella involve strangling her poor dog. Animal lovers, stop reading now!

It is tempting to say that, considering their less than amiable characters, Heathcliff and Cathy deserve each other, and not in the good way. They are, however, somehow so much more likeable than Edgar and Isabella, maybe because we know we shouldn't like them, and also because their love is just so intoxicating that we want to find something just like it, only without marrying other people just to spite the one we love. Cathy's death provides ample opportunity for the pair to, for the only time in the novel to express their love openly to one another, and while it is a violent love that we may not recognise, the passion and feeling behind it is so present that it is almost breathtaking,


"'You teach me now how cruel you've been - cruel and false. Why did you despise me? Why did you betray your own heart, Cathy? I have not one word of comfort. You deserve this. You have killed yourself... You loved me - then what right had you to leave me? What right - answer me - for the poor fancy you felt for Linton? Because misery, and degradation, and death, and nothing that God or Satan could inflict would have parted us, you, of your own will, did it. I have not broken your heart - you have broken it; and in breaking it you have broken mine. So much the worse for me that I am strong. Do I want to live? What kind of living will it be when you - oh God! Would you like to live with your soul in the grave?'"

I mean, really. Yes, he scolds her (and God knows she needs scolding!), but this is nothing compared to how amazing it must be to have someone tell you that they don't know how to live without you, because you are essentially two sides of the same coin, and you share everything with each other. It's an alluring, kind of terrifying kind of love, but at the same time, I think it is the same love we all seek and want. Without all the mental illnesses and stuff.

So, yeah. After Cathy dies, Heathcliff gets even crazier and all vengeful, and there is an entire second half of the novel that can essentially be skipped because it adds nothing to the whole Heathcliff and Cathy saga, other than Heathcliff taking his anger and pain at her death out on all the wrong people, and the dream of Cathy and Heathcliff finally coming true in the next generation in the form of Catherine and Hareton, which is nice, but nowhere near as passionate as Cathy and Heathcliff's romance (which, in real life terms, would probably be a relief). Heathcliff eventually gives in, his body deciding to end all the suffering, and he is finally able to be with Cathy again, united in death in a way they never could be in life. It's a little bit spooky, but really quite romantic- the thing that you want to happen eventually does, even if it can't be in this life. Heartwarming stuff all round, especially if it's hallowe'en (which, I realise it isn't. But never mind that!)

So, Happy Valentine's Day everyone! I hope you find your Cathy/Heathcliff, I just hope that both your souls aren't made of total crazy! Or, if they are, you both get the appropriate medical attention for that.
Posted by Laura at 21:17