If I'm not devouring a book, film, or TV series (in about 3 days), then the chances are, I'm baking. Or dead. This Monday, fortunately, I was doing the former (rather than being dead.) 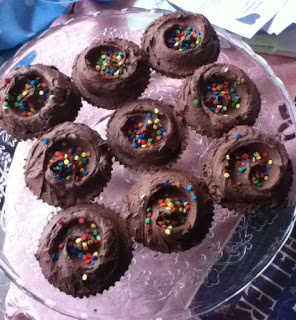 My camera sucks, and the best picture of them I got was this, on my trusty ipod touch camera. It's not great, I'll admit, but if you could smell them, you might rethink your judgement of them... They have this deliciously orangey-chocolately waft when you lift up the dome of my cake stand (I love my cake stand). Even better than this, these cakes are 100% vegan. Oh yes, that's right, and we all know that vegan food doesn't count, so please excuse me while I down about 8 of them. 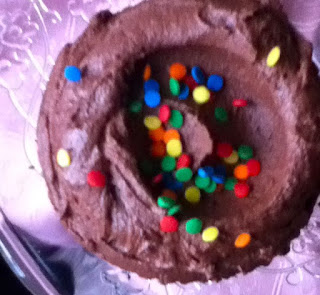 Ah. That's better. I got the recipe from the incomparable Vegan Cupcakes Take Over The World by Isa Chandra Moskowitz and Terry Hope Romero, a variation on their basic chocolate cake recipe, and I just replaced the vanilla in their chocolate frosting recipe with orange extract. I would just say that I only added orange extract to my cake mix, and it wasn't as overpoweringly orangey as I would have liked, so I would add some extra orange extract, or add one of the other orange elements for a real kick of orange (1/4 cup of orange liqueur? Yes please!) Other than that, though, these cupcakes are absolutely delicious, and very sneakily vegan- my carnivorous dad ate, enjoyed, and asked for another. Don't be afraid to set those eggs aside and have a go at making vegan cake- you won't regret it, and you'll feel totally saintly enough to have another one... and another... and oh, just one more....