One of my very favourite places in the whole world is Dylan's Candy Bar in New York City. The last (and only) time I was there, I kept seeing people with their cute Dylan's bags, but the location of the shop remained elusive to me. I had basically given up all hope of ever finding it, when, as providence would have it, about 4 hours before we were due to be at the airport, on the way to the Buttercup Bake shop, walking up 59th street past Bloomingdales, there it stood in all its technicolour glory. 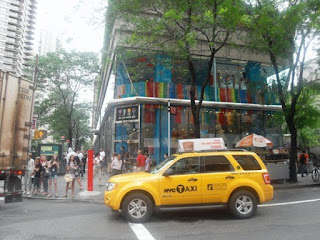 It was exciting enough to have found it. But inside was like my ultimate childhood fantasies all coming true at once. An entire floor of pick and mix! For a girl who used to go to Woolworths every Saturday and be treated to a bag of the stuff! I am actually quite sad that I didn't take any pictures of the amazing glory of this floor, but I think I was far too excited by the SWEETS! to even think of such a thing. They had (and hopefully still do!) an entire section made up of gummy bears for goodness sake, all the flavours you can think of, and some you can't. And then, every other kind of sweet you can think of. I was especially enamoured by these chalky kind of sweets shaped like blocks of lego, probably because I'd never seen them before. Let's just say, I was in my absolute element.

Downstairs, more delights were to be encountered, including a whole wall of pez dispensers (oh yes!), an american chocolate section (no offence, but American chocolate... really not that great), plus some lovely Dylan's Candy Bar merchandise. I think the only reason I didn't spend all my money in there was because I really didn't have that much left, it being the last day of my trip and all. I still managed to get a pretty respectable amount of pick and mix, plus an adorable little sweet jar though! PLUS, I got to feel smug with my cute little Dylan's bag all the rest of the day.

Now. I bet you're wondering if there's a point to all this, or if I'm just rambling about a sweet shop I went to nearly 2 years ago now, and still can't get over. While it is true that I refuse to get over it, the main reason I am now continually thinking about it again is this. 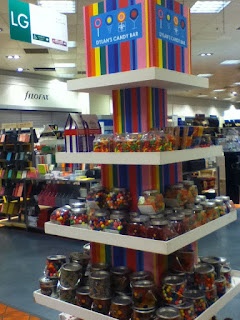 A Dylan's Candy Bar stand in England! To be more specific, in Bentalls in Kingston, on the Lower Ground floor. To say I was excited by this would be an understatement, I was completely and utterly ecstatic and elated, and I may have squealed a little bit. I realise that it's not a full candy store, and the pick and mix was nowhere to be seen, but in my mind it's a start! I like to think laterally- maybe if this sells really well, they won't be able to resist bringing an entire shop over here, and then I can have a perpetual sugar rush and be exceedingly happy all the time! A girl can dream, can't she?
Posted by Laura at 15:43