Devouring Books: The History of Love by Nicole Krauss 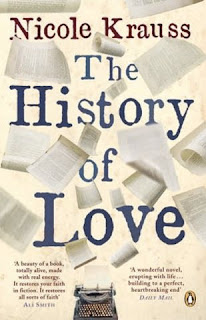 I don't quite know how to describe this book, or at least how to describe it without sounding like a gibbering idiot. Now, I don't often consider what I write to be gibbering (I'm not the greatest writer in the world, but I don't think I'm too bad) but compared to what Nicole Krauss has created with this book, I just gibber all the time. The History of Love broke my heart a little bit, and then broke it even more when I realised that nothing I ever do will be as good as this book. So that was kind of depressing, but does tend to be the way I think about things (for example: I find Radiohead depressing not because of the tone or whatever of their songs, but because I will never be that talented. True story.) but it didn't affect my enjoyment of the book one iota. I enjoyed the crap out of this book, to put it indelicately.

I definitely don't want to ruin this book for you, because there are lots of delicate little twists and turns of the plot that are each surprising and moving and just ugh! make me want to hug the book and soak in its goodness. I am, therefore, going to keep this review relatively brief, especially to prevent me from saying embarrassing things like I did in the sentence just before. So, anyway, there are basically three little threads to the narrative that all connect together in some subtle, and some not so subtle ways, so that by the end you're pretty sure that you know what's happened, but you still can't quite grasp it, kind of in the way that Leo Gursky (our hero, if you like) can't quite grasp hold of reality and look it in the face. Apart from Leo (who dominates one part of the narrative) there is also Alma Singer, a 14 year old girl who is trying to make her mother happy again after her father's death, something which she is too ill-equipped and ill-informed to do. The third thread interwoven into the story involves Zvi Litvinoff, author of The History of Love, a book that connects all three in various ways.

That's about all I want to tell you about the plot, except that it all comes together beautifully in a kind of Paul Auster-esque way, in that I got the same little jolts of excitement that I get when things correlate with other things that I got when I was reading The New York Trilogy (also an incredible book!) I have just realised that last sentence makes no sense at all, but it might if you read the book/s. Then again, it might never make sense! But anyway, the way this book is written is so beautiful, I could just cry. Stories about love make me teary generally anyway, but the lost love aspects of this story are so tragic and sad (although not overwrought, or in fact intensely focused on, which almost makes it more emotional), and it is all just so beautifully written. I clearly don't have the words to express how beautifully it is written, but suffice to say, if you read the book, you will get all the answers you are looking for and more.

The History of Love is a book with lots of narrators, and while this could make the book kind of chaotic and crazy, it really all stays so cohesive and clear that it is really just sensational. I am actually going to make myself stop here, before I say some things that we'll all regret, mostly because they'll just leave you feeling cold once you've read this book, and also because they will ruin this book. Which I really really don't want to do to you! Suffice to say, I think this book rocks big time, and I really really think you should read it. Deal? Deal.
Posted by Laura at 23:20