Devouring Books: Everything You Know By Zoe Heller 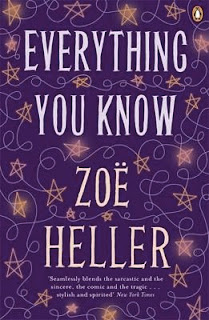 I have some mixed feelings about this book, mostly that it's not as good as Notes on a Scandal (also by Heller), but on the other hand, it was good enough for me to read in a day. So yeah, actually really quite good! I guess, also, it's unfair to judge an author by their other books, when in fact, while this book isn't as good as Notes on a Scandal, it is still better than a lot of books are. That made little to no sense, so I'm just going to talk about the book now, ok? I think it'll be better for all of us...

So, this book's protagonist is a 55 year old man called Willy Muller, an Englishman in LA who, at the start of the book has just had a heart attack. I dislike Willy a great deal, but I think that's kind of the point- you're not meant to like Willy, so that when he aims for some kind of redemption late on in the novel, you want that redemption to happen because he's been such a shit for the rest of the novel. He's very much like a Bret Easton Ellis character, without the excessive drug use, in that he seems to hate all his friends, feels indifferent to his family (one of his daughters has killed herself, and all he can do is admire the guts that it must have taken for her to do it!) and he is just generally bored with his life, and his two girlfriends. He is a pretty unspeakable man, actually, but you can derive a certain sense of satisfaction from the fact that he is at least miserable. Heller actually seems to have a knack for creating these cold-hearted, unlikable main characters, both in the manipulative Barbara in Notes on a Scandal, and the seemingly soulless Audrey in The Believers. Willy just adds himself to these relatively smoothly.

The part of the story that held more interest to me was the diaries of Willy's recently deceased daughter, which he is reading because... well, because she sent them to him, rather than because they hold any proper meaning or worth for him (I told you, he's really not a good guy). They track her progress from her mother's murky death (which Willy had something, but not everything, to do with), to following her promiscuous sister to a squat, to having a baby and all in between. What becomes clear is the portrait of a very troubled girl, passed between relatives from a relatively young age, and who has lost all sense of how she should be living. It's actually really tragic, and while Heller doesn't allow her a suicide note, it is clear that her life of poverty, a lack of love and quiet desperation lead her to the point where she just doesn't want to live anymore. I feel a lot more for Sadie than for her father since he just left- decided things would be easier in America, without a second, or even a first thought for his daughters. What a bum.

As long as Heller's intention was to make me find her narrator intolerable, then she has done an excellent job with this book- his complaints when he is in a beautiful Mexican house with 2 girlfriends and almost no responsibilities are almost too irritating to bear when you consider the state he left both of his daughters in. It is an extremely well written book, as Heller's tend to be; but it has the absolute worst blurb on the back of it. Something that really bugs me is when publishers try to misrepresent the books they are selling, in this case to make it sound like a light-hearted, chick-lit, frothy holiday read; when in fact it is a lot deeper than this, and I think it leaves you with a lot more to think about than your average piece of chick-lit (i.e. with anything to think about). If I was the kind of girl who picked up 'fun' books at the airport (which I don't because I plan my holiday reading practically before I plan the holiday) I would be seriously annoyed by this one, because, damn, it requires thinking!

Ok, that was mean. But the blurb still doesn't represent the book in this case! Anyway! Everything You Know is well worth reading, but I would recommend you go for Notes on a Scandal first, because it's just so nice and... vicious. Like I just was for a minute back there! Seriously though- does anyone else feel like this about misrepresenting blurbs? Let me know in the comments below!
Posted by Laura at 16:02