Despite the fact that, of the three things I am trying to focus on with my blog, TV is the one that takes up the greatest portion of my day; I have been relatively lax about talking about it. My bad. I think the reasons for this mainly boil down to the fact that it is easier to know what to do with a film, whereas with a TV show, I have been uncertain about whether or not to focus on specific episodes, and so ignore much of the rest of the series, or to do a wide-ranging series wide review that has to, by nature, give few details, but much gushing from my corner. So, I'm trying one of these now, and when I've finished watching The Sopranos Season 1, I'll try the other. Do let me know what you think about them in the comments if you so desire! 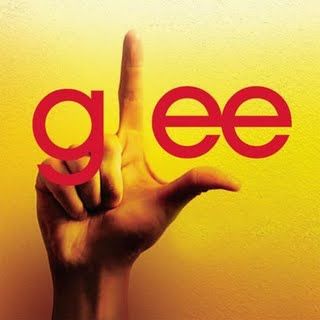 Love it or hate it, I know you've heard about/seen/worshipped/derided Glee. Unless you've been living under a rock for the past year and a bit (or even longer if you're in the US), in which case *waves maniacally* Hiiiiii! How is it under there? Is there room for two, because I could definitely do with moving out of my parents' house pretty soon. And how did you get internet access under there?!

Anyway. I normally view Glee as being exceptionally good fun, and truly hilarious (Sue Sylvester is probably the funniest TV character I can think of. I pretty much have hysterics every time she speaks). This is all great, but I don't tend to think about Glee much deeper than this, although I do rabidly look forward to it every week. 'Grilled Cheesus' changed all this, however.

If you've seen Glee (and if you haven't, you've probably stopped reading by now), you probably have a special attachment to Kurt, the young gay high school student, struggling to find acceptance, and like-minded people to spend his days with. He is arguably the most complex character in the entire programme (with the possible exception of Sue, to whom there is a lot more than excruciatingly funny one-liners), and I love him and his underlying vulnerability an awful lot. In this episode, then, when Kurt's father has a heart attack, my own heart broke in response to Kurt's extremely solitary pain.

Kurt's pain is solitary in part because, as he proclaims, he doesn't believe in God. This not only separates him from the solace that having faith can bring, but also separates him from the people who are closest to him, when he needs them most, because they can't understand his refusal to take part in religious belief

This made me uncomfortable. I don't really want to get into a debate on religion because OH my God (no pun intended) that just devolves into a giant mass of unchangable positions, but mine basically rests upon this:


"I find it interesting that the meanest life, the poorest existence, is attributed to God's will, but as human beings become more affluent, as their living style and standard begin to ascend the material scale, God descends the scale of responsibility at a commensurate speed" (Maya Angelou, I Know Why The Caged Bird Sings)

In other words, people use 'God' as a justification for their suffering, but forget all about him once they have material comforts, since he was never really there to begin with.

Anyway... I felt during this episode that Kurt was being persecuted, at basically the most difficult time in his life, for refusing to believe in a God that tells him everything he feels and is, is wrong. I felt that his arguments for atheism were a lot more compelling and made a lot more sense than everyone else's for religion (which seemed to essentially be 'Oh my gosh, how can you not believe in God? He's like totally real and stuff'), and yet he was the one being treated like there was something wrong with him for believing this. I mean, I know this is America, but come ON! The gay kid's reasoned, thought out atheism s somehow objectionable, but everyone else's blind faith is the only way to go? I don't know how to begin to accept that point of view, and it was here that I began to lose faith with Glee.

But then. Something seemed to shift almost imperceptibly. Mercedes invited Kurt to her church, not in a last ditch attempt at conversion, but more to open his mind up to the possibility that there could be more to experience than just this life, and just this world. This part of the show reminded me just how much I adore gospel music, and the amazing energy of gospel churches. Kurt seemed to have the same reaction, but, in a typical, realistic, glee-like way, this didn't mean that he had an instant conversion to Christianity the second the music started, but merely that he had opened his mind, just a little bit. Which was enough.

Nothing in this episode moved me more than Kurt's talking about, and singing for his father.


The home movie style footage of Kurt's childhood, especially that of himself and his father at his mother's funeral made me cry quite a lot, since it brought home what Kurt's father truly means to him- they are literally everything to each other. Combined with the most mournful version of 'I Wanna Hold Your Hand' I have ever heard, the effect is almost too much, I just want to dive into the TV screen and tell Kurt that everything will be ok, God or no freaking God. Which is something that nobody ever really reassures him of, in the entirety of the episode.

And then, he goes to see his father in the hospital. He reminisces about how how they helped each other to cope after his mother died, and then he says this:

And, in true TV style, his father squeezes his hand. But I'm not going to complain about this, because Kurt didn't have to gain a religious belief in order for it to happen, he just had to work out what was important to him, and because he does, he is rewarded. It is beautiful, and it doesn't require God to happen. Just a little faith in something.

So that was 'Grilled Cheesus' (GOD, that name really doesn't reflect the tone of that episode at all!) Watching this made me so glad that Chris Colfer won a Golden Globe for portraying Kurt 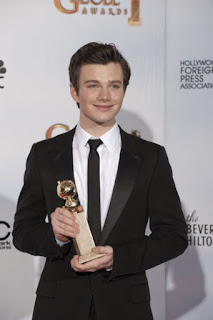 That kid is so amazing! I'm definitely looking forward to the further developments of Kurt as the series progresses, and please please please can he find a boyfriend?! Thanks!
Posted by Laura at 18:28