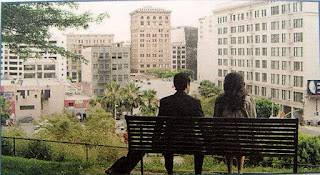 Seeing as it's Valentines Day tomorrow, (boo hiss, or, alternatively, yay! depending on how you think about it... I'm not really bothered by it, but I am going to have lunch with my Facebook wife, so it should be pretty awesome anyway!) I've decided to narrow my devouring ways to films and books dealing specifically with love. (500) Days of Summer is especially suited to the task, since, as we are aware from the beginning "This is a story about boy meets girl, but you should know upfront this is not a love story." Catering, therefore to all people, encompassing the good and bad in relationships; whilst not making anyone feel too bad about their own current relationship status. As an added bonus, our heroes Tom Hansen (Joseph Gordon-Levitt) and Summer Finn (Zooey Deschanel) both work at a greeting card company, the ideal place to start a post about Valentines Day texts, since, as we all know, they made the whole thing up anyway, to make people feel either amazing/horrible about themselves. So thanks for that.

(500) Days of Summer is one of my favourite films of recent times (I was going to say of last year, but it actually came out in 2009. Time is going far too quickly) because it's just so damn much fun. It has an awesome soundtrack, amazing (especially for me) cast, and I love the way the story is told, not in a linear fashion so much as it being the story of one relationship, cut up into lots of little moments to try and help Tom see where everything went wrong. I also enjoy the fact that it doesn't necessarily ask you to hate Summer (like so many films with this same subject matter would do), so much as to look at both parties in the relationship and see the flaws in both of them. Summer is, in a way exonerated for her non-commital attitude to their relationship by the sensible words of a blind date Tom has at one point in the film,


Alison: Can I ask you a question?

Alison: She never cheated on you?

Alison: Did she take advantage of you in any way?

Alison: And she told you upfront that she didn't want a boyfriend?

Tom fails to grasp the idea that, his disappointment over things not working out with Summer are at least in part because of his refusal to really listen to what she was trying to tell him, and I think that Alison's inferred point here (well, in that case, get over it!) is completely justified. It is also completely ignored.

More than anything, what I really like about this film is the little bits that really just make me grin and leave me really cheerful, quite aside from the whole mess that is Tom and Summer's association with each other. I love the part when they go shopping in Ikea, playing house and really enjoying themselves, mainly because it echoes my very first visit to Ikea (only 2 years ago- yesterday, in fact!) and because of how much I adore Ikea (a lot, in case you hadn't guessed!) I also love Tom's little sister, and her street-smart ways- she seems so much more mature and able to handle things than Tom is, and she's only 12 years old! The 'penis game' that they play in the park is also a favourite moment of mine, since it inspired a similar game that amused me and my housemate during exams last year, where I decided to shout 'vagina' out of her window to poor unsuspecting passers by... It was a lot of fun when you're avoiding doing anything actually useful! I also just love Zooey Deschanel, in any role she has ever played pretty much, and considering that she stars alongside Joseph Gordon-Levitt, who I still harbour affection for from 10 Things I hate About You; there was very little chance that I wasn't going to like this film. Oh yeah, and there's also this:


Summer: I named my cat after Springsteen!

Tom: Oh yeah, what was his name?


I have already mentioned the greeting card company, and it is a pivotal part of the film. It serves as a way for Summer to provide inspiration for Tom, in suggesting he should be an architect if that's what he really wants to do, and it allows for one of my favourite jokes of the film, "I figured, why make something disposable, like a building; when you can make something that lasts forever, like a greeting card?" How can you not find someone who says that adorable?! Apart from this though, Tom's monologue towards the end of the film really summed up what is wrong with the greeting card industry, and while it comes from a heartbroken place, he still makes some really interesting points about the nature of cards versus what we are actually feeling, and I for one happen to agree with him. Here's an exert of what he says:


"Why do people buy these things? It's not because they wanna say how they feel, people buy cards cause they can't say how they feel or they're afraid too. We provide the service that lets them off the hook. You know what? I say to hell with it. Lets level with America at least let them speak for themselves right I mean look, look. What is this, what does this say? "Congratulations on your new baby." How bout "congratulations on your new baby, guess that's it for hanging out, nice knowing ya." How bout this one? With all the pretty hearts on the front, I think I know where this ones going. Yup "Happy Valentines Day sweetheart, I love you." Isn't that sweet? Ain't love grand? This is exactly what I'm talking about. What does that even mean, love? Do you know? Do you? Anybody? If somebody gave me this card Mr. Vance, I'd eat it. It's these cards, and the movies and the pop songs, they're to blame for all the lies and the heartache, everything. We're responsible. I'M responsible. I think we do a bad thing here. People should be able to say how they feel, how they really feel, not you know, some words that some stranger put in their mouth"

You see?! I think this film is worth seeing for this scathing attack on the greeting card industry if nothing else, and there is a lot else to recommend it too. I'm not going to tell you if Summer and Tom end up together or not, because that would completely ruin it for you, but suffice to say, everyone ends up in a pretty good place by the end, older, wiser and better equipped to deal with things than ever before. And no one is out being a whore for the greeting card industry, which is all you can ask for in the end, really! 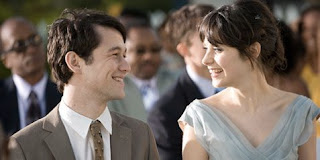