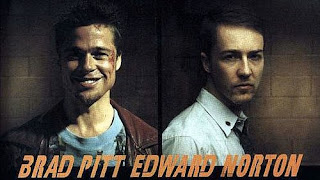 Films don't really get a lot better than Fight Club, if you ask me. It's a kind of action film without excesses of boring action (they go bang bang, I go yawn yawn), and extremely dramatic while also being funny. It also happens to have one of the biggest twists in cinema history that I don't think everyone knows (unlike the one in The Sixth Sense, which I can never see now I know the ending), and that makes it difficult to talk about with anyone who hasn't seen it since you just want to blurt out the big surprise that helps to make it so great. I'll try not to do that here.

I first saw Fight Club quite a long time ago, and the ideals that it represents are still things that I (mostly) believe in. There is so much in this film about corporate control of the world, anti-materialism, pro-teamwork, and gaining control of one's own life and really living. There is also of course, terrorism, death, and mayhem which I really can't support, but the rest is all good. According to IMDb, Rupert Murdoch hated Fight Club from the beginning. I can't imagine why...

The story is basically this. Ed Norton is our trusty narrator, an insomniac who is having an existential crisis, and all he seems to care about is stuff. To try and combat this, he starts going to support groups for people with terminal illnesses, until he meets a woman there, Marla Singer (Helena Bonham Carter), who is also a 'tourist', or a big fat faker, if you prefer. What I think is interesting about Marla is the way she 'lives her life as if she could die at any moment', and I think this has a greater influence on the narrator than he realises. When he meets Tyler Durden (Brad Pitt), then, he is far more willing to accept his views and way of living than he may otherwise have been. He also doesn't have much choice, considering the fact that his apartment has just been blown up, all his precious possessions destroyed, lost forever.

Tyler convinces our narrator to fight with him, in exchange for staying at his house while he gets things sorted out. This marks the beginning of a complete change in the pair's activities, spawning the beginning of a complete lifestyle change for the two men. They lose all interest in anything other than fighting, and become intertwined with the world of men. This is something I can't quite get on board with in Fight Club, it's intrinsic seeming sexism. While there is Marla, who can quite easily hold her own against the narrator, everything else seems to point to blaming women for the lives that they have, whilst also excluding them from the exclusively male world of fight club. This is evident when Tyler suggests "we're a generation of men raised by women. I'm wondering if another woman is really the answer we need." Not only that, but fight club is exclusively for men, even though the anger and resentment it represents can equally apply to women:


Man, I see in fight club the strongest and smartest men who've ever lived. I see all this potential, and I see squandering. God damn it, an entire generation pumping gas, waiting tables; slaves with white collars. Advertising has us chasing cars and clothes, working jobs we hate so we can buy shit we don't need. We're the middle children of history, man. No purpose or place. We have no Great War. No Great Depression. Our Great War's a spiritual war... our Great Depression is our lives. We've all been raised on television to believe that one day we'd all be millionaires, and movie gods, and rock stars. But we won't. And we're slowly learning that fact. And we're very, very pissed off.

It's like only men are allowed to be angry at the futility and depression that exists among their lives, while women are just supposed to be fine with it, or possibly just stay around the house sewing or something. It's sad that this seems to be the case though, since the messages are just so provocative that you want them to apply to you too. There is however the case to be made that the narrator gets lots of his ideas from Marla, so there is perhaps a silver lining to this perceived misogyny that I might be missing a little bit. Or at least I like to think so.

In spite of this little bit of possible sexism, I still adore Fight Club. I just can't help myself. It seems to say the things that a lot of other films merely ignore, or even put forward as good ways to live and exist. It is about the most quotable film I've ever seen (Casablanca aside), and I do enjoy saying all these radical things "The things you own end up owning you" and getting strange looks from people who go 'Laura, you own like a million books', and it's true that I do. But this doesn't stop me from agreeing with Tyler Durden on so many things. Except for that whole blowing up buildings thing. Naughty Tyler. 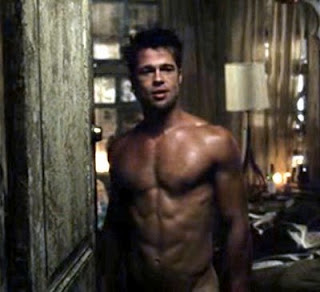