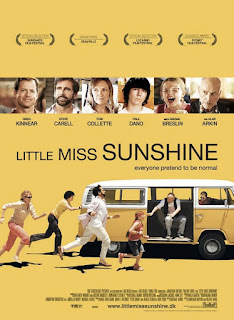 I love Little Miss Sunshine so so much because, to put it mildly, it is the smartest comedy of recent years (smart as in, Judd Apatow has been nowhere near it), and one that celebrates the weirdo without completely mocking them. It is, therefore, entirely perfect for me, a self-confessed weirdo who doesn't really think that's anything to be ashamed of. On the contrary, being strange is so much better than being like everyone else, because you see things differently and don't feel the pressure to conform or be perfect. Because, let's face it, that's never going to happen! Every single character in this film is weird in one way or another, and I love them all for it. And so I love this film.

The flimsy basis for this film is that our youngest family member, Olive (Abigail Breslin) has a place in a beauty contest that, for various reasons the entire family have to go to (Grandpa [Alan Arkin] wants to go because he has been coaching her, Mum Sheryl [Toni Collette] can't drive a stick so Dad Richard [Greg Kinnear] also has to go, and they of course have to take son Dwayne [Paul Dano] and delicate Uncle Frank [Steve Carrell] because he has just tried to kill himself.) Phew, got all that? Good. Now, I call the beauty contest a flimsy basis not because it doesn't make any sense (although, in all honesty, from the very start this does not look like the kind of family that goes in for beauty contests) but because, as in so many road films, it is not the destination or the pretext that really matters, it's the journey, and what it teaches them about themselves and each other. In this case, that's a lot.

My favourite characters (apart from Grandpa who, is so brilliant onscreen but would be kind of terrifying to know in real life!) in this film have to be Frank and Dwayne- they are clearly the smartest two characters (but not in an unpleasant or arrogant way) and I think have the best insight into life. There is one scene between them, on a pier, that really cements their importance to the film (and, I suppose, to my life). To be honest, though, there are things to love in all of these characters, even Richard, who comes across for most of the film as a complete asshat. He redeems himself by staying cool in front of a cop, and for his shenanigans at the end (you'll have to watch to find out!)

Watching this film again last night, I was reminded again how creepy beauty pageants really are. Apart from their horrible sexist-ness, and the fact that everyone associated with them always seems to go 'Omg, every little girl wants to be a beauty queen!' (Um, I didn't. I wanted to be a whole lot of things, but none of those included beauty queen), the little girls who are dressed up and made up and ahhhh, fake tanned, just kind of terrify me! It is in this atmosphere, however, that the Hoover family seem most normal- they have not subscribed to this crazy pageant world (even Olive seems mainly uncomfortable with it) and this means they look like fish out of water, which is only a good thing in such an insane situation (with, correct me if I'm wrong, a host who totally seems like a paedophile! Seriously, it can't just be me who thinks this!) Anyway, I love that this is a place where the Hoovers don't fit in, and I think that it endears them to the audience just that little bit more, especially with the dancing. But I'll say no more about that!

I basically just love Little Miss Sunshine because, by presenting characters that are just a little unhinged, they make me feel more normal (kind of backwards logic, I know, but we've already established my oddness!) Or rather, that it's ok to be weird, because there will always be people around who love me anyway and will support me through anything, which I think is the lesson best learned by Olive throughout this film, that will, fictionally speaking, serve her well later on in life. You've gotta be who you've gotta be guys! Also, you've gotta watch this film, because I clearly don't have a bad word to say about it! 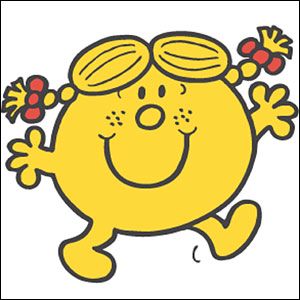 Another Little Miss Sunshine! Just because I can :)
Posted by Laura at 18:01