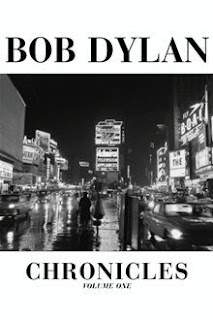 I love Bob Dylan, but one of the things I love most about him is his grumpy, mysterious cantankerousness; so I wasn't sure about reading his autobiography and dispelling all these illusions about him being raised by wolves, and then flung into a battle with a one eyed man for his life where he magically learned to play guitar or something like that. This possibly explains why the book has been sitting on my bookshelf for literally years, sadly looking at me when I bypass it for my third read of a Johnny Depp biography (NOT What's Eating Johnny Depp, though. Stay away from that!) I decided finally to stop being silly and just take the plunge into Bob Dylan's head, and I definitely did not regret it!
I don't read very many auto/biographies (although I have been doing so more recently for some unexplainable reason...), but Bob's is probably one of the best, or at least the most enjoyable I've ever read. And it shouldn't be at all. I should be infuriated by the lack of details (for instance, the wife is chapter 3 is not the same as the wife in chapter 4, but this is mentioned nowhere!), the lurching of 10 or more years in between chapters, and the general randomness of the events, people and details he has decided to include. But somehow, it just manages to work. I think it is maybe the perfect book to represent Dylan, in that you almost don't want to know too much about him, so that there is still a haze of mystery over him; but it still gives enough information so that you still feel like you could get to know him and make him your friend (this may only apply to me. But I tend to feel that way about famous people I really really like anyway! Which is probably not good).
But anyway, my insanity aside, let's talk about the book. The chapters essentially show young poor Dylan in New York, then struggling with fame and trying to be a family man Dylan, then the anatomy of getting his groove back and the fine details of making an album, and then finally, Dylan in his hometown, and then signing his record deal with Columbia records. The details are vague and the anecdotes pretty random, but what Dylan really does is create a real feel of the times and places he is talking about- we are almost there with him, feeling the thrill of performing in tiny New York venues, or really sensing his boredom at, once again being called a revolutionary, or the voice of a generation; something which Dylan very strongly insists in this book that he is not. One of the best evocations is of New Orleans, a city Dylan clearly loves, which is as well written a description of a place as I can remember reading by anyone:

"New Orleans, unlike a lot of those places you go back to and that don't have the magic anymore, still has got it. Night can swallow you up, yet none of it touches you. Around any corner, there's a promise of something daring and ideal and things are just getting going. There's something obscenely joyful behind every door, either that or somebody crying with their head in their hands. A lazy rhythm looms in the dreamy air and the atmosphere pulsates with bygone duels, past-life romance, comrades requesting comrades to aid them in some way. You can't see it, but you know it's here. Somebody is always sinking. Everyone seems to be from some very old Southern families. Either that or a foreigner. I like the way it is.

There are a lot of places I like, but I like New Orleans better. There's a thousand different angles at any moment. At any time you could run into a ritual honoring some vaguely known queen. Bluebloods, titled persons like crazy drunks, lean weakly against the walls and drag themselves through the gutter. Even they seem to have insights you might want to listen to. No action seems inappropriate here. The city is one very long poem. Gardens full of pansies, pink petunias, opiates. Flower-bedecked shrines, white myrtles, bourgainvillea and purple oleander stimulate your senses, make you feel cool and clear inside.

Everything in New Orleans is a good idea."

I realise that was about the longest extract ever, but really- how much do you want to go to New Orleans now?! I thought so...

One thing that Dylan talks about a lot is the burden of expectation that rested upon him because of the (amazing) songs that he wrote and recorded in the 1960s. Everyone was pushing upon him that he had to lead the youth and keep protesting the government etc, when all he wanted to do was stay home and be a father, mainly because he only ever saw himself as a musician and songwriter, NOT the voice of a generation, or whatever other titles were pushed upon him. It was at about this point of the book that I found myself feeling very relieved that Bob Dylan had a secure family and home life to keep his head away from all that stuff, since otherwise, I fear, he could have ended up crushed by the load of expectation on his shoulders, in a similar way to Kurt Cobain. Which would have been so terrible, and would have deprived the world of so much wonderful music. So I try not to think about such things!

There were a couple of things that annoyed me in this autobiography. The first was a couple of pages where Bob informs us all about his friendship with Bono, and actually seemed to speak of him admiringly. Since I hate Bono more than about 99.9% of all people, this really got me irritated and almost made me want to stop speaking to Bob. But then I realised that, while he is friends with morally objectionable people who claim to care about the earth but then fly a hat across continents, he's not actually my friend. Which then annoyed me even more! Stupid Bono. The only other thing I would say is that there are some parts where the technical aspects of music get a little... well, dull if you don't really know what he's talking about, but if you're a musician or know anything about music tech then you're definitely going to find these parts interesting!

These are both just tiny little complaints of mine, however, in a book that I thoroughly enjoyed from start to finish. I guess we all knew Bob Dylan could write, since we've all heard his songs, that are really more like poetry, but I didn't quite expect his autobiography to be quite as good as it really is. I also found areas where I could identify with him, which is something I wasn't really expecting, but it happened! There is this one incident where, he gets a Robert Johnson from his Columbia records boss, and he feels so strongly attached to it that, when his friend is far less enthusiastic about it, he decides that he "didn't want to play it for anyone else." This is something that I so strongly relate to- I get so attached to some books and films that I'm loathe to let anyone else read or watch them in case they insult them, or even don't feel as strongly about them as I do. I still haven't let my sister watch Juno, and I didn't talk to my parents for days after they laughed at American Beauty (laughed! Can you believe it?!) With this viewpoint, it's amazing that I have this blog at all, but I really do want to inspire the kind of love for the things I love in others. I just don't want to hear it if they don't love it too!
I am, however, strongly recommending that you read Chronicles if you have even a passing interest in Bob Dylan, and probably even if you don't. That's how well written I found it. I'm now eagerly awaiting Volume two! 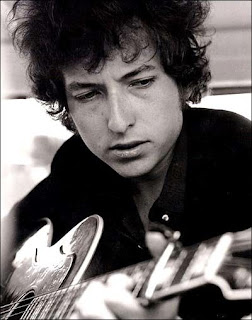