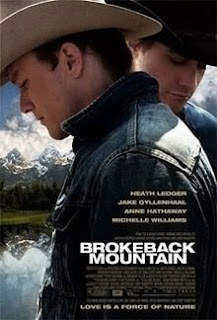 I have loved Brokeback Mountain before it was even partially a movie, having seen pictures of it being filmed in some godawful celebrity magazine. My basic attitude to it was: Jake?! Heath?! Gay Cowboys?! I'm there! I wasn't, however, expecting it to have quite the effect it did on me. I went in there, pretty much for the eye-candy, and came out with a whole new perspective on love and the way we should live. I also came out with the urge to read everything Annie Proulx had ever written, a valiant aim that I'm not too far away from completing (Accordion Crimes is my favourite. Just in case you were wondering.) I always find, though, that the emotional punch that Brokeback Mountain packs doesn't fade with watching, and I always some away from it with wet cheeks and a righteous sense of the injustices in the world! Heath Ledger's death didn't help things either, and although he is not the cowboy who dies in the film, watching his performance is enough to make me mourn him all over again- the world has lost such an amazing actor that it almost hurts to watch his greatest achievement.

I remember that the first time I watched this, I didn't at all appreciate the first twenty minutes or so because I was just on edge waiting for the carnal adventures to begin (yes, I just said carnal adventures. Better than bum sex, non?) So, in a way, the film didn't even start for me until that happened. Now, when I watch it, I can take in the beautiful landscapes, that look exactly like a Proulx story (as they should), and all the extremely subtle little looks that the two men share as they feel the growing attraction towards each other. In my first viewing, I thought the sex came practically from nowhere, but my numerous revisits have shown me the error of my ways- it is all there, practically from the beginning, you just have to know where to look for it.

I was so disappointed when Ennis (Ledger) married Alma (Michelle Williams). It's not that I don't like her, or have anything against her, but by marrying her he is cheating himself out of what he really wants, and her out of a real marriage. Alma is not innocent in things either, and once she catches Ennis and Jack (Gyllenhaal) having a rather physical reunion, that should be it for her. However, once you consider that it's the sixties and she has two children, things don't seem quite so simple. Instead, she chooses to just go on resenting him, until she finally can't take it anymore and goads him into divorcing her. Jack has a similarly poor marriage, his wife (Anne Hathaway) is seemingly more interested in the business than in him, and he is stuck under the tyranny of his father-in-law. Jack and Ennis are apart for large portions of the film, but it is almost like they are only living half-lives. It is only when they come together that they begin to live fully, and as they would like to.

And when Jack and Ennis are together onscreen, it's hard not to want them to be together always. That's certainly what Jack wants "it could be like this, just like this, always." and while he does lack a certain amount of common sense, this is still the case- if they really tried, they could make things work and be together. This is something that Ennis just can't do, however. It is clear from the little things, the way he watches a truck drive by when they are talking, for instance, that he is terrified of being 'caught' with Jack, and this fear seems to stem from an event in his childhood where a gay man was viciously murdered just for being gay. It's a really sad story, told in extremely stark lighting, that reveals just how ingrained it is within Ennis that homosexuality is wrong. It is from this feeling that he can't escape, and because of it, it is clear, he will never be able to be happy.

Ennis and Jack's last meeting is so bittersweet that it is clear that it marks a real turning point for their relationship, and for the film in general. In the evening things go well, and Jack tells Ennis "The truth is, sometimes I miss you so much that I can hardly stand it," making my heart break into a million tiny pieces. Just as I pull myself back together, the lovers have a big fight, which culminates in Jack's confession that he has sex with Mexican prostitutes, and this exceedingly poignant exchange:


Jack: I wish I knew how to quit you

Ennis: Well why don't you? Why don't you just let me be? It's because of you Jack that I'm like this! I'm nothin'... I'm nowhere... I just can't stand being like this no more Jack.

I can't actually bear seeing Ennis cry. As Ennis drives away from this scene, we get a flashback from Jack's perspective, where they are young and both up on Brokeback for the first time. What I think this represents is a time where it felt like anything was possible for them, where they could live together and own a ranch and everything would be perfect. When the camera goes back to the older Jack (in a comedy moustache and padded belly) it is clear that his dreams haven't happened, and he resents this. This is something that I think everyone can appreciate, and gives a universal message to viewers- summing it up in a Rolling Stones song title, you can't always get what you want.

I choose to think that, after Jack's death, Ennis lives a life of regret of not being with the person he loved for the entire time he was alive. The scene in Jack's parent's house is, in my opinion, the most moving of the entire film, as Ennis gets to experience first-hand Jack's lonely childhood, and he also feels the full force of how much he misses him- Jack always gave Ennis emotional support more than anything else, and now he is gone, who is Ennis going to talk to? I also adore the way Jack's mother unquestioningly puts the two shirts into a brown paper bag, and implores Ennis to visit again, as though she knows just what he meant to her son, and she wants to keep Jack alive through him. It's just so lovely, but at the same time so devastating, and it's difficult to see how Ennis will ever be able to make himself happy, now that Jack is gone, and he has fully realised what he has lost. It is clear from the ending that he is finally able to take some solace in his family, but I wonder and worry whether this is going to be enough to stop Ennis from continuing to live a life of endless regret.

Ok, I know I go on a lot about Brokeback Mountain, but I do love it so! I'm just going to add a little 'I hate Mark Wahlberg' in here now, since wikipedia just kindly informed me that "Mark Wahlberg declined the starring role, saying he turned down the opportunity because he was 'a little creeped out' by the homosexual themes and sex scene." I have only two things to say about this: 1) What a charming and tolerant guy Mark Wahlberg must be. He sounds pleasant. I wish he was my friend. 2) Thank you Mark Wahlberg for your homophobia, because with you as Ennis instead of Heath Ledger (an actor who is, by the way, about a million times better than you, and never used to call himself 'Heathy Heath' to boot) Brokeback Mountain wouldn't be half the film it is.

There you go, a review of Brokeback Mountain and Mark Wahlberg's beliefs all rolled into one. Do I spoil you or what?! Have you seen the film? Do you have an extreme love for it like I do? Let me know in the comments!
Posted by Laura at 19:02